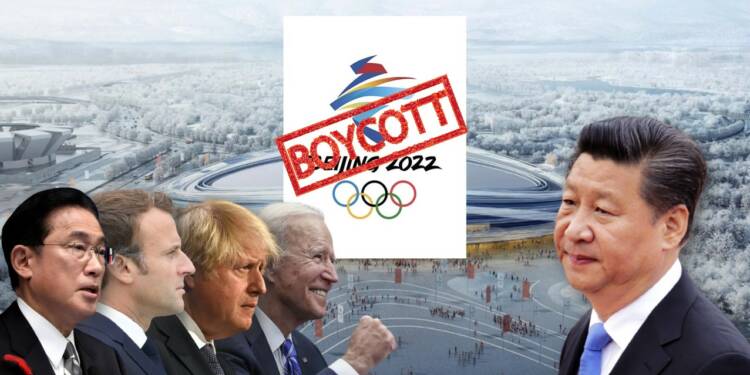 The Chinese Communist Party has not grown in its understanding of the responsibilities which accrue as a country becomes an economic superpower. After gifting the world with the Covid-19 pandemic, Beijing has acted irresponsibly by trying to capitalise on the misery of its neighbours and other countries the world over. Now, the world is showing its discontent by boycotting the Beijing Winter Olympics diplomatically.

This has resulted in obvious warnings from the CCP, which in a statement said that Australia, the United States, the United Kingdom and Canada will “pay a price” for a diplomatic boycott of the Beijing 2022 Winter Olympic Games.

At a time when China is shedding crocodile tears, the media reports have shown the mirror to the CCP. China has itself staged four full Olympic boycotts, which is why it has no locus standi when it comes to criticising world powers for a diplomatic boycott of China.

According to a report by the Spectator Australia, China is the “gold medalist” for Olympic boycotts, having staged no fewer than four full boycotts throughout the decades. This historical reality appears to be at odds with Beijing’s argument that the latest diplomatic boycott led by the United States is a “political manipulation and grave distortion of the Olympic Charter.”

Communist China has a history of boycotting Olympic games

China originally boycotted the Olympics in 1956, when Australia hosted the event for the first time in Melbourne. According to the Spectator, Chinese athletes did not compete in Tokyo in 1964, Montreal in 1976, or Moscow in 1980.  “These were full boycotts, not simply the diplomatic boycotts imposed by the US, Australia, Canada, the UK, New Zealand, and Lithuania (to date) on the Beijing Winter Games,” the report reads.

The article goes on to show how compromised the International Olympic Committee (IOC) has become, exposing that its uniforms are provided by a Chinese apparel company that manufactures textiles in Xinjiang province, most likely using slave labour from Uyghurs. The report also criticises the International Olympic Committee’s (IOC) tacit backing for China’s dictatorship during the recent sexual assault incident involving Chinese tennis star Peng Shuai.

Read more: Beijing 2022 is turning into Berlin 1936 and the world is shamefully allowing it

Other Western media sites, including The Hill in Washington, D.C., have recently called for punitive action against the IOC. Last week, a think tank researcher named Michael Mazza published an opinion piece in the newspaper urging the US State Department to sanction IOC officials and bar them from entering the country, claiming they were complicit in China’s ongoing human rights abuses.

The Beijing Winter Olympics, to be held in the Chinese capital city next year are a major event for the Chinese Communist Party. At a time when the global democratic community is breathing fire down China’s neck for its persecution of non-Han Chinese communities and ethnic minorities, not to mention its brutal crackdown on Hong Kong and the constant threat of invading Taiwan, for Xi Jinping – the Winter Olympics is an opportunity to humanise the CCP.

But the democratic world is not willing to extend such favours to Xi Jinping. At least 19 major countries have decided not to sign a truce with China ahead of next year’s Winter Olympics. India, the United States, the United Kingdom, Japan, Canada and even Turkey are among several other nations who have refused to sign the ‘Olympic Truce’ with China, which is an ancient tradition meant to lead to a cessation of hostilities among warring sides to ensure smooth conduct of the games.

Each of the countries that have not signed the Olympic Truce has effectively kept the doors open for boycotting the games at any time of their choosing. Further, these countries are not bound by any document or ‘truce’ which would serve as an impediment to them taking on China militarily if the situation so demands around the time when the Beijing Winter Olympics are on.

Australia, the United States, the United Kingdom and Canada along with New Zealand, will not be sending officials to the Games in February next year, citing China’s human rights abuses against Uyghur minorities in Xinjiang province. In addition to the above-mentioned countries, many other countries are also boycotting the Olympics, but are keeping their actions low-key. China should just accept its fate that karma has come back to bite it for all the time it had boycotted Olympics in the past.