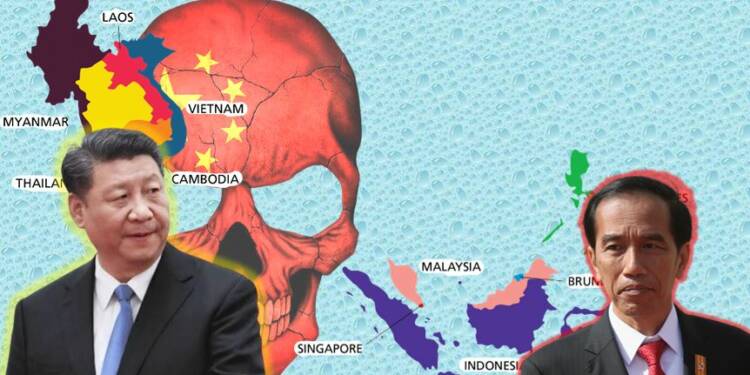 Indonesia, the largest country in the Association of Southeast Asian Nations (ASEAN) is looking to punish China and is leading the charge against the communist nation even if it comes at the cost of a major split in the regional body right in the middle.

Indonesia has invited Brunei, Malaysia, the Philippines, Singapore and Vietnam to convene next year as a part of the ASEAN Coast Guard Forum, which met virtually in October. Vice Admiral Aan Kurnia, chief of Indonesian maritime security agency Bakamla, said, “We will share experiences on how to respond in the field when we face the same ‘disturbance’” in a veiled reference to China.

Also read: We foretold that China would split ASEAN into two groups. It has almost succeeded

This divides the ASEAN right from the middle. If you look at this map, all the southern and eastern ASEAN countries are coming together in a group, leaving apart Laos, Myanmar, Thailand and Cambodia.

Why is Indonesia convening an anti-China Coast Guard forum?

Indonesia has been getting damn angry about Chinese aggression, of late. Indonesia is not a part of the South China Sea disputes, but Beijing says its “nine-dash” line covers the Exclusive Economic Zone (EEZ) of Indonesia’s Natuna Islands.

Also read: Indonesia ropes in Russia and Britain to fight China’s claims in the Natuna Sea

China went as far as asking Indonesia to not drill in its continental shelf in the North Natuna Sea, because well, the CCP says that it owns this territory. China was actually trying to restrain Indonesia from drilling its own oil and natural gas. But a gutsy Indonesia went ahead with a six-month drilling project anyway that was completed last month. And now Indonesia’s Bakamla is proudly claiming a grand “victory” over the Chinese.

Now, Indonesia is upping the ante. It thinks, “enough of China’s nonsense, let’s just bring together all the countries that face Chinese bullying and combine their powers”.

All China haters coming together

Well, we just told you that Indonesia hates China over the Natuna Islands dispute. But Malaysia, Vietnam and the Philippines are no fans of China either. Vietnam is, in fact, the biggest power rivaling China within ASEAN. It had defeated China in the 1979 war and is today getting a lot closer to anti-China powers like India and Japan. It is stealing a number of businesses from China and impoverishing the communist nation.

Also read: The power of Vietnam

Malaysia and the Philippines both share contentious South China Sea disputes with China. China already controls the Scarborough Shoal — a disputed feature in the South China Sea, claimed by both Beijing and Manila. Presently, Chinese maritime militias are also eyeing Whitsun Reef, a geographical feature in Filipino waters, which is also being claimed by China.

Malaysia, on the other hand, is itself a victim of Chinese bullying. Chinese coastguard ships harass Malaysian oil and gas vessels operating their own waters. Well, because the CCP claims Malaysian territory also and says Malaysia can’t drill there.

Brunei, a tiny Sultanate, where China has invested extensively, might seem like a weak link. But last year, Brunei was appointed as the ASEAN chair and the country showed the ability to mobilise anti-China opinion over the South China Sea disputes.

Also read: China’s efforts to please the ASEAN chair, that is Brunei, go in vain as Brunei hobnobs with other ASEAN nations

And finally, Singapore is the power expected to lead the anti-China tirade within the ASEAN. As a stable political regime and a strong economy, Singapore is the perfect candidate to take ASEAN forward. And also the country doesn’t have any disputes with any other ASEAN country, which allows it to take on China without any baggage.

As Indonesia brings together all anti-China forces, it is the China-Cambodia nexus that gets undermined. China was already controlling the ASEAN through its longtime ally Cambodia, which is presently functioning as the ASEAN chair.

On China’s behest, Cambodia has even allowed Myanmar’s military junta to become a part of ASEAN and carry on its vindictive campaign against former State Counsellor of Myanmar, Aung San Suu Kyi. Cambodia was compromising ASEAN in face of Chinese aggression.

Also read: Only Singapore can protect ASEAN from the Cambodia-China nexus

But now, Indonesia and other China haters have decided that they will form an exclusive club that will work against Beijing regardless of Cambodia’s chairmanship of the ASEAN. The ASEAN is headed for a major split into two halves- one that is led by Indonesia and seeks to contain China, and another one led by Cambodia that seeks to appease China.