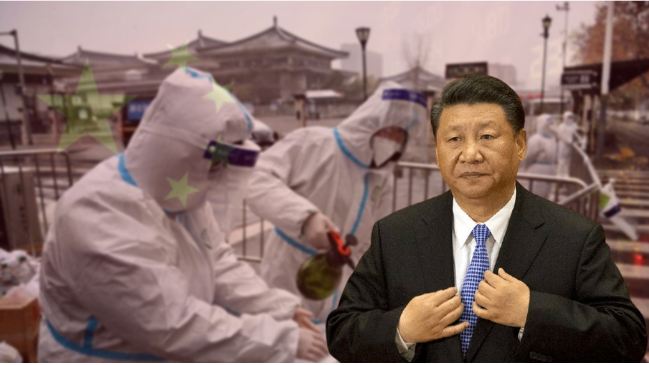 Since the last week, China has been facing a major threat- growing COVID-19 cases in the northern Chinese city of Xi’an. And then a recent outbreak of epidemic hemorrhagic fever is making the health crisis even more severe.

China has locked down 13 million people of the city for the past week but has failed to contain rising infections, and it is now trying to impose even harsher measures. But things may have already slipped out of Beijing’s hands. Xi’an is located in the Shaanxi province that serves as the top coal-producing province in China.

China’s tight lockdown has failed to yield good results in Xi’an. As per official numbers, the capital of China’s Shaanxi Province recorded 175 locally transmitted cases on Monday and the total tally has now surged to 811.

Authorities are now rushing to impose more stringent measures and somehow contain the spread of the Coronavirus. A city government social media account announced on Monday that it would impose the “strictest social control measures”.

Vehicles have been taken off the road, and they will be allowed only for assistance in disease control. Police and health officials will be “strictly inspecting” cars and violators will face jail time of 10 days and a fine of $78.

Xi’an’s outbreak is now spreading to other cities. Two other cities in Shaanxi province have also reported a case linked to Xi’an.

And the situation is particularly risky because Chinese migrant workers travel to their homes for the upcoming Chinese New Year holidays. Meanwhile, the Chinese Communist Party (CCP) has started scapegoating local officials and 26 of them have been punished for lapses in virus prevention.

Chinese manufacturing to take a hit all over again

The rising Coronavirus infections are bad news for China. 2021 has been a forgettable year for the Chinese manufacturing sector.

Due to the repeated COVID-19 outbreaks that also jammed Chinese ports for several months earlier this year, manufacturing and export activity went down dramatically.

And then, there was the big power crisis. Energy-intensive industries like aluminium smelting and steelmaking were the biggest victims of the Chinese power crisis. Food processing, magnesium and textiles- there is absolutely no industry that didn’t suffer because of the power crisis.

For China, the coal crisis was the biggest problem. In 2020, Xi Jinping imposed an unofficial ban on high-quality Australian coal and in lack of Australian coal, the Chinese thermal power plants simply couldn’t produce enough electricity.

China’s manufacturing purchasing managers’ index, or PMI, remained below 50 points in September and October, which is an indicator of overall contraction in industrial activity. But things started normalising in November and the PMI did rebound to 50.1 points. China’s factory output had just started picking up as pressures like crippling surge in raw material prices and power rationing eased.

Chinese manufacturing had just started picking up. But there could be a new crisis knocking at Beijing’s doors. Firstly, there is this danger of the COVID surge in Xi’an spreading to manufacturing powerhouses like Jiangsu, Guangdong, Shandong, Shanghai and Zhejiang. This would lead to more COVID outbreaks and more lockdowns, shutting down more and more factories.

But there is a more immediate problem at hand. Shaanxi province serves as the top local source of coal in China. The biggest coal-producing region in China had ordered its 98 coal mines to raise their annual capacity by 55.3 million tonnes annually in October.

Amidst rising coal prices in the world and supply disruptions, China wants to rely on Shaanxi for meeting its coal demand and supplying sufficient electricity to its industrial plants. However, with Xi’an in grip of a strong COVID-19 surge and other cities in the Shaanxi province too recording COVID-19 cases, there is every chance of coal production getting constrained.

Another power crisis or another phase of clogged ports is the last thing that China wants.

But the increasing COVID-19 cases in Xi’an and signs of an outbreak in Shaanxi serve as a warning- Chinese manufacturing is going to witness another breakdown and this will probably be worse than the earlier one.