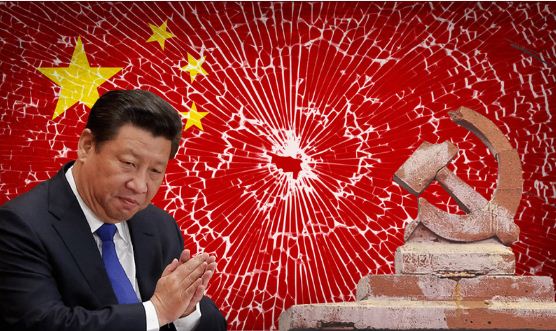 The Chinese Communist Party (CCP) is so obsessed with the Soviet collapse that it almost implicitly gives away its fears of a similar collapse in China. Chinese State media does some really amazing stuff to put up a brave face, like calling the Soviet collapse “a vaccine for China.” This defensive mindset and continuous denial only shows that China is acutely aware of the fact that it can collapse just like the erstwhile USSR.

And now, it has come to light that China is studying the Soviet collapse, in order to avoid its own disintegration. It has been 30 years since the Soviet Union collapsed, but Xi Jinping continues to search up Soviet disintegration literature. Honestly, China couldn’t have given a bigger acknowledgement of its Soviet collapse fears.

Why is China afraid of a Soviet-like collapse?

In Xi Jinping’s defence, he has a right to be afraid. I mean when the CCP institutionalises the genocide of Uyghur Muslims in Xinjiang, steals historical grasslands from Tibetan nomads, and bans the Mongolian language in Inner Mongolia, Beijing has every right to apprehend that these regions will break out of China.

China can break into six regions quite easily. Xinjiang, Inner Mongolia and Tibet are already on the global agenda. Moreover, Hong Kong too is having problems with the CCP. The city loves its liberties and freedoms, whereas the CCP wants to impose its authoritarianism over the city.

Manchuria is also facing disillusionment. The region has historically been a subject of wars between Russia, China and Japan. It is home to the Manchu people, the fourth largest ethnic minority in China. The Manchu people are ethnically different from the majority Han Chinese community in China, and they hate the Han Chinese domination policy of Beijing. And Chengdu too has a history of separatist sentiment.

How China plans to avoid a Soviet collapse

The thing with Soviet Communism was that it never embraced the free markets that led to mushrooming of State enterprises. Ultimately, the West developed way too quickly for the Soviet Union to catch up with, and this triggered disillusion in the masses. China, therefore, started adopting capitalism with Chinese characteristics to keep things in check.

Another thing that China did was to avoid Glasnost. Mikhail Gorbachev, the last leader of the erstwhile USSR, believed that after decades of censorship and secrecy, it was time to open the society, allow freedom of expression and increase government transparency. This was in a way a failed experiment because when the people were allowed to speak, they demanded liberation.

So, China decided it won’t let people speak. China uses harsh censorship laws and almost everything, including account books of foreign-listed companies has become a State secret in China.

Finally, China has learnt that it must vigilantly guard its borders. The Soviet Union was one monster of a country and was actually made up of 15 different republics, dozens of ethnicities, languages and cultures. Ultimately, it was realised that a centralised Communist system that erodes cultures and traditions would instil a sense of disillusionment in different ethnicities.

China believes that if it doesn’t take care of the periphery, it will disintegrate. This explains the brutal human rights violations in Tibet, Xinjiang and Inner Mongolia- China is trying to use its surveillance powers to keep bordering provinces in check.

Why China is failing?

China’s Soviet fears are becoming a reality. Firstly, China did embrace capitalism. And it did lead to tremendous growth. Mao Zedong’s era saw the Great Famine kill 45 million people in China. Today, China is the second-largest economy in the world, and people are not dying due to famines.

But tremendous growth has created huge income inequalities in the Communist country. Today, China has more billionaires than any other country. But most people are still living under $10 a day.

The rich have made connections with the Communist Party. They don’t respect the law, as a corrupt CCP stays hands-in-glove with them. So, the commoners are outraged. Xi tried to change things with his “common prosperity” agenda, but it has only led to the rich business class also turning against Beijing.

Meanwhile, crazy censorship and secrecy in China has made the CCP obnoxiously corrupt. Corruption in China has actually surpassed that in the erstwhile Soviet Union.

China believed that economic prosperity will allow Chinese people to endure human rights violations and repression. But economic growth is now stagnating and slowing down in China. And Beijing itself is turning somewhat like the Soviet Union with a large part of its money going into an arms race, the space race, foreign operations, and maintenance of bureaucracy.

And Covid-19 is the biggest assault. It has forced China to lock down millions of citizens. Repeated lockdowns and economic collapse is making people apprehensive in some regions. China does have a history of peasant rebellions, and one act of rebellion in any part of China will set in a long process of literally breaking it up into several smaller countries.

And if 30 years after the Soviet collapse, China has to keep learning lessons, it really means that a total disintegration in China is imminent.