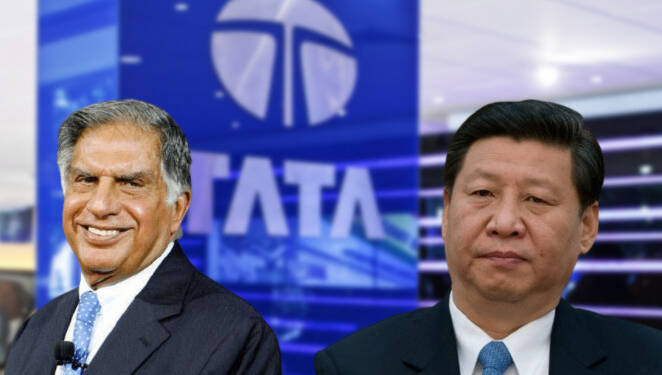 You must have heard of the Sino-India rivalry. Indian Army troops have repeatedly taken on the Chinese People’s Liberation and have successfully shown the Chinese their place. But the battle is now going beyond the borders and armies. It is reaching into the corporate offices of the two countries and one Indian industrial conglomerate- Tata Group is giving some serious body blows to the Chinese.

Over the recent past, the Tata Group has given three big blows to the Chinese-

What makes Tata big for India?

Tata Group is easily India’s most iconic business brand. Just to give an example- it has more employees than Toyota, Coke, Facebook, Microsoft & Google combined. And these are the big companies that I am talking about.

It operates in over 100 countries and Indians simply love Tata. And they have every reason to. Tata has been a part of India’s glorious growth story. Tata Consultancy Services (TCS) is the biggest private employer in India with over 500,000 employees in the country, and this is one of the many business arms of the Tata Empire that I am talking about. Till 2021, TCS has been recognised as a global top employer six consecutive times.

Tata Group has grown into one of the biggest business conglomerates with 29 publicly-listed Tata enterprises having a combined market capitalisation of $242 billion.

Tata Group is taking on China

In India, you will find many internet quotes, social media posts and videos showering praise on Ratan Tata, a former chairman of Tata Sons. For Indians, Tata is a sentiment being an over 100 years old brand.

And now, Tata Group is only improving its reputation further by taking on the Chinese. As per the latest reports, the Tata Group will replace Chinese mobile maker Vivo as the Indian Premier League’s (IPL) title sponsor from this year.

Amidst growing animosity between India and China, there was already a growing demand that the Chinese company should be replaced as the cash-rich cricket league’s sponsor.

But the point is that Indians had a problem with a Chinese brand getting involved in the IPL. And now Tata Group has resolved their grievances.

Tata has kept pace with time and is now looking to invest close to $300 million in an outsourced semiconductor assembly and test (OSAT) plant. An OSAT plant sources silicon wafers from semiconductor foundries, packages, assembles and tests them, finally turning them into finished semiconductor chips.

And where do you go for semiconductor chips- yes, you got it right, Taiwan. Tata Group is reportedly discussing its semiconductor chip business plans with some international majors including those from Taiwan. This is complementing India’s efforts of trying to rope in Taiwanese manufacturers Taiwan Semiconductor Manufacturing Company (TSMC) and United Microelectronics Corporation (UMC) for chip-making in India.

Tata wants a possible tie-up and makes an impressive foray into the semiconductor chip business amidst the ongoing global chip wars. In doing so, the industrial conglomerate is showing scant regard for China and is openly engaging with Taiwanese semiconductor giants.

Tata Motors is a popular brand in India and is an undisputed leader in the heavy automobiles sector. It is also making a comeback of sorts in the passenger vehicles segment and has recently become the second-largest carmaker in the country.

But it is the Tata EVs that seem exciting. Tata Motors is selling EVs at a breakneck speed in the country. In November 2021, it sold 1,751 EV units which were four times more than November 2020.

One thing is clear- Tata will lead India’s EV revolution. This is bad news for Chinese EV makers like BYD which was planning to launch EV passenger vehicles in India and get a big share in the country’s emerging EV market.

The ongoing battle between India and China is therefore no longer characterised by two militaries, diplomatic establishments and governments wrestling with each other. The corporate sector too has joined with an Indian conglomerate giving severe jolts to China.