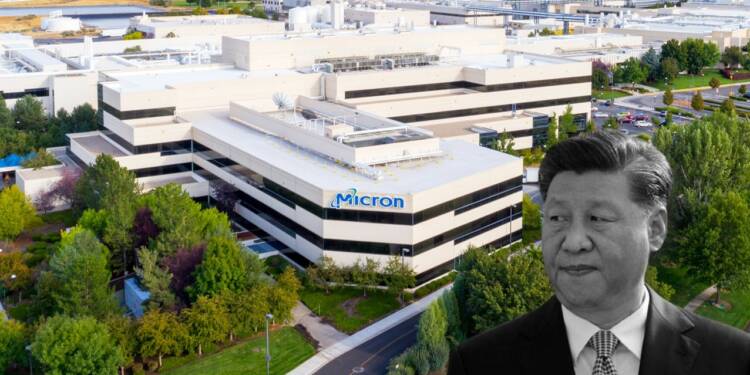 It has been quite some time since companies from across the globe started moving out of China. The pandemic made them realize the dangers of too much dependency on China and China-focused supply chains. The extreme disruptions in the global supply chain, the great semiconductor shortage, the decreasing transparency in China, unreliable IPR policies, talent loss and technology leaks to other Chinese companies, crackdowns by the CCP and the rising conflict between the western countries and China on the matter of South China Sea, Xinjiang, Hong-Kong and Taiwan are some of the major reasons because of which companies are moving out of China.

The latest global brand to follow suit is Micron Technology. It is a US-based chip manufacturing giant which manufactures all kinds of memory chips like RAM’s, SSD’s etc. The company said in a statement on Wednesday that it will close down its DRAM design operations in Shanghai by this year’s end. According to the sources the company employs around 150 Chinese engineers in the centre, who all will be asked to relocate to either the US or India. The process is expected to be completed before the end of 2022.

According to some employees and industry experts, the real reason behind this decision is to prevent poaching of talented and skilful employees, technology leaks and IPR infringement by the Chinese competitors. There has been a historic loss of technical know-how as some former employees and management were poached by big tech firms in China. This seems to be a precautionary and preventive measure by Micron, for the long-term interest of the company, its employees, and its technological patents and IPR’s.

Chen Rang, a long-time investor and entrepreneur in China’s semiconductor industry, said in an interview that, “Micron’s Shanghai team has lost more than a third of its 300 employees because of other chip design companies in China poaching its employees with high salaries and stock options.” He added that Micron’s move to relocate was unsurprising.

This isn’t anything new or surprising, companies working in China, for quite some time, have been facing several issues. They suffer from cyber-attacks; IPR infringements and Patent thefts; the poaching of talented and skilful employees by other local Chinese competitors; the Chinese culture of reverse engineering and plagiarized products, technology, and sensitive data leaks; crackdown by the Chinese authorities and many more.

Wang Lifu, a Shanghai-based analyst said in an interview, “Many US memory chip design companies opted to put their design teams outside China in the first place, and Micron is moving in that direction.”

For quite some time now, many countries across the globe have been pushing and advocating for China exit move to diversify the global supply chain and manufacturing. Also, some countries like Japan and India have even invited and offered incentives to the companies who relocate out of China.

Japan last year announced a massive 56 trillion yen ($490 billion) fiscal stimulus package, a part of which will be used to lure microchip manufacturers to the country. Soon, Japan subsidized a new $7 billion chip factory in western Japan planned by Taiwan Semiconductor Manufacturing Company and Sony Group Corporation. The government’s immediate subsidy to TSMC was expected to be up to ¥400 billion. Japan is looking to stump up around half the setup costs of semiconductor factories built in the country and attract manufacturers from China and the US as it looks to shore up its chip supplies.

Last year, India too announced a Rs 76,000 crores PLI (Production Linked Incentive) scheme to attract investments from global chip manufacturers and support them in moving their units to India. This scheme is aimed to boost local chip manufacturing, create jobs and employment, and reduce import bills over the next six years. The incentive is so lucrative that many companies like TSMC, Samsung, Micron, and others have already invested or are in the process of investing in the country. The scheme is designed to attract chip and semiconductor manufacturers from across the world, but most importantly from China.

Read More: In a final blow to China’s chip industry, Tokyo will pay big money to chip companies if they move to Japan

Companies leaving communist nation is not just about investments and supply chain, but it is affecting China in many ways. The increasing job losses and unemployment; brain drain and migration of talented and skilful Chinese people out of China; reducing revenues and taxes; and most importantly, the fading away of the “Ideal Investment Destination” image of China, are some of the issues that China is currently suffering.

It is China’s own doing. Result of its discriminative, regressive, and unequal policies that are forcing the companies to move out of China. China’s loss is the Gain for other countries, most interestingly its neighbours like Japan and India.