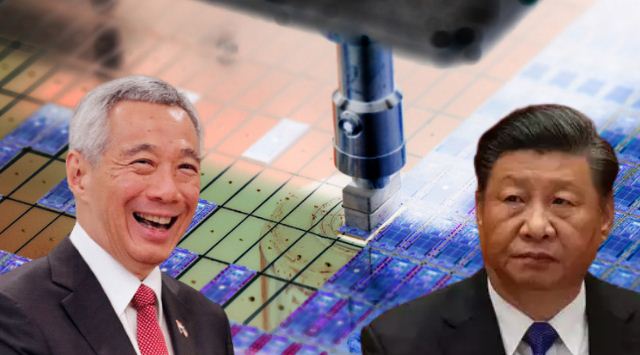 Singapore has already discarded China. But it is now going a step further. It wants to damage China and has decided to hit the paper Dragon where it hurts the most— semiconductor production. Singapore is planning to meet the demand for the next-gen devices with a new US$210 million joint research investment with semiconductor equipment maker Applied Materials.

The US-headquartered Applied Materials and Singapore’s Agency for Science, Technology and Research’s (A*Star) Institute of Microelectronics (IME) are extending their research partnership to 2026.  The latest investment will upgrade and expand a joint lab set up by the two entities in 2011, and enable it to accelerate materials, equipment, and process technology solutions for hybrid bonding and other 3D chip integration technologies.

This comes as a huge setback to China, which is itself desperate for semiconductors and is grappling with supplies.

Singapore has always had a healthy semiconductor industry. The country has a favourable taxation and regulatory regime, which also makes it one of the world’s most advanced economies. Singapore also has a good talent pool and some highly skilled workers as well as ease of connectivity, which has promoted a thriving semiconductor industry.

Outside the “big four” in Asia— Taiwan, China, South Korea and Japan, Singapore has the largest semiconductor manufacturing industry in the continent.

Back in 2000, the semiconductor industry in Singapore was doing really well with the production of USD 61.5 billion worth of computer, electronic, and optical products, including semiconductors. The electronics industry in the Southeast Asian nation, however, declined owing to fierce competition from Taiwan, another island nation that loves to hate China.

Singapore is a paradise for both foreign chipmakers and local contract manufacturers. Some of the global industry giants like the third-largest semiconductor producer GlobalFoundries, Samsung, Intel, SK Hynix, Micron and Qualcomm maintain a presence in the island city-state.

China is trying to build a local semiconductor industry, but it is simply not taking off, as going self-reliant in such sophisticated technology is not a cakewalk. Now, if a country like Singapore goes all out to develop a huge semiconductor industry of its own, then Beijing’s crisis will only worsen as the supply chains of these crucial chips will get localised in a country trying to decouple from China.

Singapore trying to untangle itself from China

Singapore’s big semiconductor push is just another episode in its awakening against the China threat.

The Southeast Asian nation understands that its portfolio investment worth billions of dollars and extensive trading ties with the Communist nation is not a great situation to be in.

After this episode, Singapore realised that it must untangle its economy from China. Now, Singapore is making it clear that it will go solo, redevelop itself into a semiconductor giant and discard China completely.