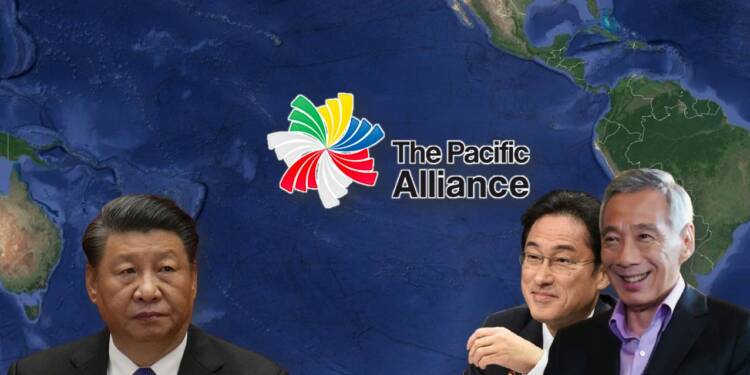 Japan has found a new ally to take on China not just in its immediate neighbourhood, but across the world. Singapore has emerged as a power-packed city-state with a strong economy, which is looking to counter Chinese belligerence, aggression, and neo-colonialism across the world. The most recent example of Singapore tightening the screws on China has come in the form of it signing a robust and rather unprecedented free trade agreement with Latin American countries like Chile, Colombia, Mexico, and Peru. Interestingly, these countries also constitute what is known as the ‘Pacific Alliance’.

Just to give you an idea of how significant this development is; together, the ‘Pacific Alliance’ countries form the 8th largest economy in the world. The combined gross domestic product of Chile, Colombia, Mexico, and Peru is more than US$2 trillion. Speaking of the free trade agreement between Singapore and the Pacific Alliance countries, it will enable Singaporean companies to enjoy greater market access to the Pacific Alliance markets, by reducing their export costs so that their goods and services can be priced more competitively.

Singapore’s Prime Minister Lee Hsien Loong called the signing of the free trade deal and joint declaration a “landmark moment” in Singapore’s partnership with the Pacific Alliance. He added, “Singapore is honoured to be the first Associate State of the Pacific Alliance, and the PASFTA (Pacific Alliance-Singapore Free Trade Agreement) will institutionalise and strengthen the economic links between our countries.”

It is pertinent to note that more than 100 Singapore companies spanning diverse sectors, including trade, technology, and innovation as well as infrastructure do business in Pacific Alliance countries. With the signing of the agreement and the joint declaration, Singapore will become the first associate member of the alliance.

China has managed to lure Central American and Caribbean countries with its exploitative economic aid – using which it is colonising them. China is also giving Covid-19 vaccines to its friends in the region, further indebting them in gratitude. China is looking to take blatant advantage of vulnerable nations in the region. It is therefore not surprising that the red rogue country is building 40 ports in the region. According to Politico, China has significant loans with Latin American countries that Beijing uses as political leverage.

Singapore joins Japan in countering growing Chinese influence in Latin America. It was in July 2021 that Japan had begun its Latin American outreach. Back then, former Japanese Foreign Minister Toshimitsu Motegi had visited four countries in Central America and the Caribbean to help the US counteract Chinese influence in Washington’s backyard. These countries were Guatemala, Panama, Cuba, and Jamaica.

Read more: After rattling China on the Taiwan front, Japan begins its assault against China in Central America and Cuba

On the agenda was the top Japanese diplomat’s plan to explain the “free and open Indo-Pacific” concept to the countries he visited. He also offered Japanese support for building high-quality infrastructure and helping with training talent. Separately, former Prime Minister Yoshihide Suga had also held phone conversations with the leaders of six Pacific Island nations – Fiji, Kiribati, Palau, Papua New Guinea, Tuvalu, and Vanuatu – urging them to join Japan’s efforts to achieve a free and open Indo-Pacific area.

In November last year, the Vice President of Colombia had asked Japan to join the Pacific Alliance.

Earlier this month, Japan and Singapore had pledged to maintain the high standards of market access and rules of the Trans-Pacific Partnership free trade deal (CPTPP).

With Singapore’s free trade agreement with the Pacific Alliance, it has paved the way for countries in the region to cut down on their dependence on China, and instead, turn to democratic powers and economic hubs like itself and Japan for business. Together, Japan and Singapore will ensure that beginning with Latin America, China’s nefarious plans are foiled the world over.