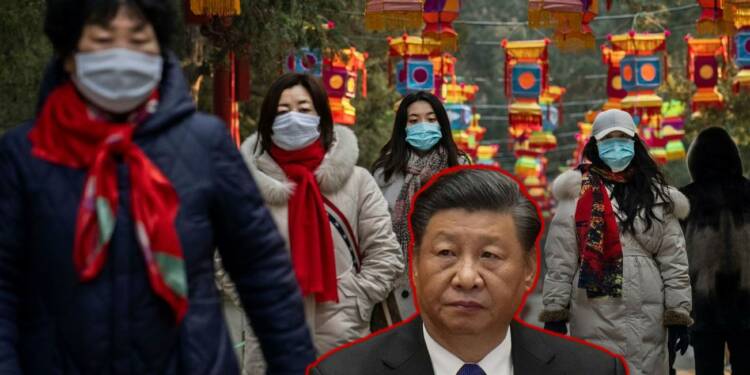 “Unemployed rubbish;” this is what Chinese women nowadays have to say about Chinese males working for the CCP. “Unemployed” because there are not many companies left in China to provide them with jobs. And “Rubbish” because there can’t be a better word to describe anything related to the Chinese Communist Party. In China, it’s Chinese women v/s the CCP now, and no matter which side ends up winning this ongoing battle, it’s a sure thing that this has put China’s very existence at stake.

“Leftover women,” that is how a county in Central China recently described unmarried Chinese women. Yihuang county in Jiangxi province announced a scheme for “leftover women” to marry CCP members in return for the hefty financial benefits and preferential treatment by the government.

Shanghai-based media outlet The Paper reported that free houses, employment, and birth allowances were offered to older young women or those aged above 26 if they marry unemployed men. The county government said, “At present, the phenomenon of ‘older young female cadres and workers’ remaining single in our county has become a very prominent problem, which urgently needs the care, help and support of the whole society.”

All in all, Chinese women were being asked to marry unemployed CCP members as it could have solved two major problems for the communist party: one being the unemployment among the male CCP cadre and the other being the falling birth rates in China.

Simply put, the CCP wanted to make better use of its idle sitting males by forcing them to produce babies using “leftover women.”

But little did the country realize that it was already in for big trouble. This triggered a massive wave of backlash on Chinese social media. The proposal was shamed online. Infuriated women kicked off an online campaign against the CCP cadre quite boldly which took the county officials by surprise.

One woman wrote on Weibo, “Why should a 26-year-old female be told that she is ‘old’ and has to have a baby with unemployed rubbish?” Another woman vented her anger out by saying, “I think I know why the marriage rate and the birth rate keep falling, if they don’t respect women or treat women as human beings, then the extinction of mankind is not far!”

Read More: China is trafficking women to address their skewered gender ratio. All thanks to its One-Child Policy

How China kept its women deprived of everything they deserved

Chinese women are hell-bent on destroying the CCP. You see, China is a hellhole for women where they are hardly considered anything but baby-making machines. For CCP, women are made to shoulder the burden of families, and nothing else! Women were loathed, they were abused, and they were stripped of opportunities that were available to men in abundance. But now, this is the payback time for Chinese women.

China is realizing its mistake the hardest way possible. Women in China are now refusing to marry, breed and have big families. China recorded its lowest birth rate last year, which fell below 7.52 births for every 1,000 people. China, so far, has tried every trick in the book to encourage women to have children, but nothing has yielded positive results.

Read More: Women in China don’t want to get married at all, the reason – the strict one-child policy

And needless to say, this is an existential threat not just for the CCP but for China as well. Without women giving birth to children, how can societies take care of their older generation? How can the Chinese economy remain up and running if there are not enough workers available? Frankly speaking, the CCP has found its worst enemy in Chinese women, and this war is definitely going to cost the CCP its very existence.