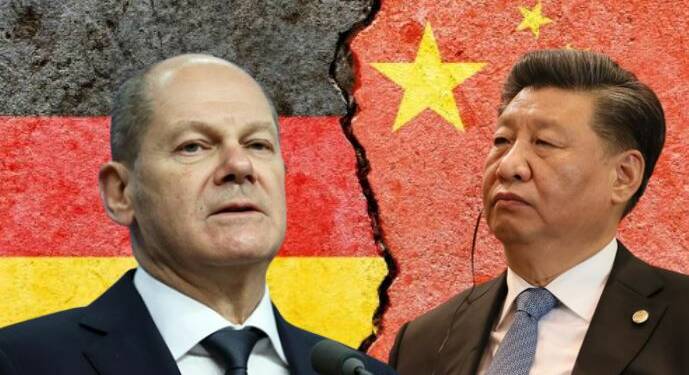 Germany is making it resoundingly clear to the world – Beijing is no longer a friend of Berlin. China has shared a cosy and mutually beneficial relationship with Germany for over 16 years. But with new Chancellor Olaf Scholz taking charge in Berlin, things have taken an awful turn for the Communist nation led by Xi Jinping. The Chinese president is being smacked hard by Germany repeatedly. First, in a coalition agreement of the new German government, China was classified as a “systemic rival”.

The document also called for increased international participation of “democratic Taiwan”, pointed to human rights violations in Xinjiang, and demanded a restoration of the “one country, two systems” policy in Hong Kong. Most importantly, the coalition agreement – which laid out the new government’s broad policies, targeted China by calling for greater scrutiny of foreign investments in Germany’s critical infrastructure. And then, Berlin decided to go ahead with a diplomatic boycott of the Beijing Winter Olympics currently underway in the Communist nation.

Now, Germany has decided to bring a sense of cohesion among all its governmental departments, so that the county puts forward a unified front to make life miserable for China. According to Nikkei Asia, the German foreign ministry is poised to send a paper to other government departments urging them to regard China as a “systemic rival.”

The memo to be sent to various government departments in Germany is meant to formalise the country’s anti-China stance. The document would make official key China-related points in the coalition agreement that Germany’s three ruling parties signed after their election win over Merkel’s Christian Democratic Union last September.

The new German government’s foreign policy is led by the Greens Party – which is by far the most China-sceptic party in Germany.

What Necessitated the German Foreign Ministry’s Move to Send a Note across Departments?

government functions in a unique manner. Various government ministries and departments function independently, keeping the interests of their sectors, at times, above the national and security interests of Germany. Here’s an example: The German Foreign Ministry has taken a decisive anti-China turn which finds resonance with the Chancellor himself. However, the Ministry of Trade, Economy and Industry might not share the views of the Foreign Ministry.

Read more: A huge crackdown on China is set to begin in Germany

You see, one in three German cars is sold in China, and China is Germany’s second-largest export market after the U.S., at just over 100 billion euros ($114 billion) in 2021. So, the Ministry of Trade, Economy and Industry might want to maintain good ties with China in order to not upset the economic dynamics between the two countries.

That serves as an impediment to Germany’s security interests; not to mention, it is a direct affront to the country’s foreign ministry. It therefore becomes necessary for the foreign ministry to take matters into its own hands and make it clear for all other ministries and departments that China is to be treated as a “systemic rival” henceforth.

Last month, for the first time ever, a German warship called Bayern visited Vietnam, where it carried out a military exercise with the Vietnamese Navy. After Vietnam, the German frigate was slated to pay a visit to India, Japan, Australia, Korea, Guam and Singapore. The voyage itself reveals how Indo-Pacific has suddenly become a top foreign policy matter in Berlin.

While the top echelons of the German government are making it clear that Berlin has classified China as an enemy, it would not auger well for some small-time ministry or department to engage extensively with China. Therefore, the German Foreign Ministry has decided to direct all departments and ministries that they are required to treat China as a ‘rival’ in all their dealings – even those which are done with a sense of independence.