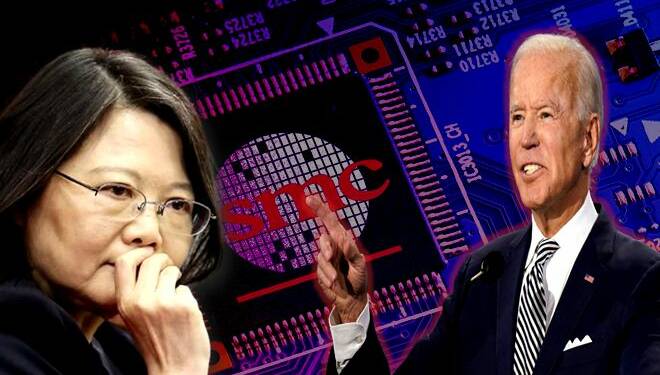 Joe Biden is a disaster. He has failed awfully in curbing down the Covid-19 pandemic, has proven to be a bully, is pushing a far-left agenda on all Americans, and is leading the country into a spiralling economic crisis. Inflation hit an all-time high under Joe Biden’s leadership, and amidst the surging crisis, he is seen retiring for a holiday to Camp David. The United States has many friends willing to help it. These friends can alleviate USA’s unfortunate economic woes, apart from solving a significant portion of the country’s supply chain miseries.

However, these friends can’t act unless Joe Biden asks them to. I am talking about Taiwan. You see, it genuinely wants to help the United States. It is keen on making the United States self-sufficient in semiconductor technologies. However, the construction of Taiwan Semiconductor Manufacturing Co.’s first advanced chip plant in the U.S. is three to six months behind schedule, and the onus lies on the shoulder of Joe Biden.

Three factors are putting the project’s schedule in jeopardy

Joe Biden has not been able to control the pandemic. Covid-19 deaths have skyrocketed since he took charge of the White House, and Americans are being fed booster vaccine doses with every emerging variant.

The Biden administration is doing nothing to create a skilled workforce that can get employed by TSMC to work at its upcoming facility in Arizona. Instead, the company has been left to fend for itself, and make labour arrangements all on its own. For an overburdened TSMC which is opening its first manufacturing facility in the United States, one would expect the Biden administration to extend all possible help and make things easier for it, but that is not the case.

Complicated processes for obtaining different types of licenses for construction is a major factor contributing to delays in the TSMC project. Again, Joe Biden should have intervened and ensured that the Taiwanese manufacturer does not have to bang its head on the doors of one government department after the other, but evidently, the White House is least interested to make life easier for TSMC.

According to a report by Nikkei Asia, TSMC initially planned to start moving in chip production equipment by around September this year, but the company has told suppliers that this will be pushed back to around February or March of 2023.

Joe Biden is not committed to Taiwan. Currently, he is busy stoking a war in Eastern Europe. The man simply has no time to spare for solving America’s many domestic issues, since his goal of creating conflicts around the world is too elaborate to neglect. And then, when it comes to domestic issues, the TSMC’s woes in Arizona figure least prominently. Gender politics and radical-left agendas top the chart.

Read more: Ukraine vs Taiwan – Why is Biden ignoring China, but provoking Putin?

Joe Biden has been humiliating Taiwan for quite some time now. In December 2021, Taiwan’s digital minister, Audrey Tang appeared via video link to address the US-hosted ‘Democracy Summit’. Tang presented a map showing countries ranked by civil rights as part of a “digital authoritarianism” discussion. No prizes for guessing, Taiwan and China were labelled with different colours. To be specific, Taiwan was coloured green and China was coloured red.

Joe Biden did not like this, so he directed the Taiwanese official to be censored. Subsequently, her video feed was cut off. She was only audible. Needless to say, the map differentiating Taiwan from China was no longer visible. This was done to not antagonise China, and to keep up with Washington’s pathetic tradition of bowing down to the so-called ‘One China’ policy.

Joe Biden is no friend of Taiwan, and the difficulties TSMC is facing in Arizona are proof of the same. Taiwan wants to help America, but Biden is blinded by his love for China.