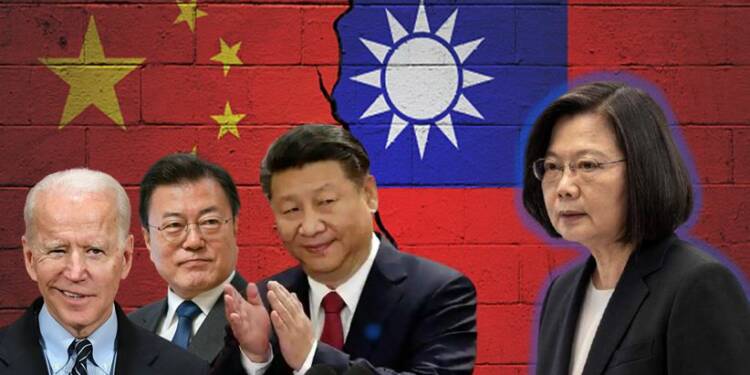 If leaving allies in a pinch had a competition, South Korean Prime Minister Moon Jae-in will come to close second to the US President Joe Biden. Just days after the Biden administration publicly humiliated Taiwan’s Digital Minister in the Democracy summit, the Moon administration reversed the conference invitation over “cross-Strait issues”. The word, which alludes to the Taiwan Strait, is often used in diplomacy to describe ties between Taipei and Beijing, which considers the island to be its territory, and intends to seize it one day if necessary, by force.

Also read: China may not impose a war on Taiwan, but Taiwan has already started a trade war with China

This development saw overt criticism by Taiwanese officials towards the South Korean government’s action. “The South Korean acting representative has been summoned to Taipei to express our strong dissatisfaction over the impolite action,” said spokeswoman Joanne Ou. She also stated that Taiwan’s de facto ambassador to Seoul has submitted a protest. However, even after this, the response from Seoul was again in favour of the Chinese Communist Party (CCP) and Xi Jinping.

Not so ally-like behaviour from South Korea:

However, South Korea seems to be proud of its decision and prove that even in his last days, Moon Jae-in is making sure that China-pandering goes on, even at the expense of allies and alliances. South Korea’s decision to cancel an invitation of a Taiwanese minister to a global technology conference was made in accordance with its diplomatic principles, rather than to avoid antagonizing China, a senior presidential official said on Wednesday.

“The cancelled invitation of Minister Tang was decided after a comprehensive review of relevant circumstances”, the presidential official said on the condition of anonymity. “Rather than being a measure mindful of China, it was made in accordance with our diplomatic principles”, the official said. And to rub salt on the wounds, the official said that there is no change in South Korea’s policy to expand practical exchanges with Taiwan throughout unofficial relations.

While this may have been criticised more heavily by the allies, the Biden administration had already set the precedent for humiliating Taiwan’s officials during the recently concluded Summit of Democracies.

By inviting Taiwan, the US portrayed its commitment to defend democracies against communist tyranny. The US made the ostentatious move to showcase its boldness, its will to challenge the one-China policy, and its intention to call China’s bluff on Taiwan.

But when push came to shove on December 10, Taiwan was left in the lurch. Taiwanese minister got censored, humiliated and reproved. He got punished for speaking the truth and for calling out China’s barbarism. He got snubbed for labelling Taiwan as an open country. In a summit for democracies, an authoritarian China registered a flawless victory, at the behest of none other than Joe Biden himself.

Taiwan’s digital minister Audrey Tang appeared via video link to address the US-hosted summit on Friday. Tang presented a map showing countries ranked by civil rights as part of a “digital authoritarianism” discussion. No prizes for guessing, Taiwan and China were labelled with different colours. To be specific, Taiwan was coloured green and China was coloured red.

Also read: So how powerful Taiwan really is – Politically, Militarily, and Economically

After Tang concluded her remarks, the moderator went to some other panelist. 20 minutes later, Tang was again asked to participate in the discussion, but startlingly, her video-feed was cut off. She was only audible. Needless to mention, the map differentiating Taiwan from China was no longer visible. If that’s not humiliation, then only God knows what is.

While the Biden administration’s actions set the precedent of humiliating Taiwan to placate Xi Jinping, the actions by the Moon administration has set the trend in motion.