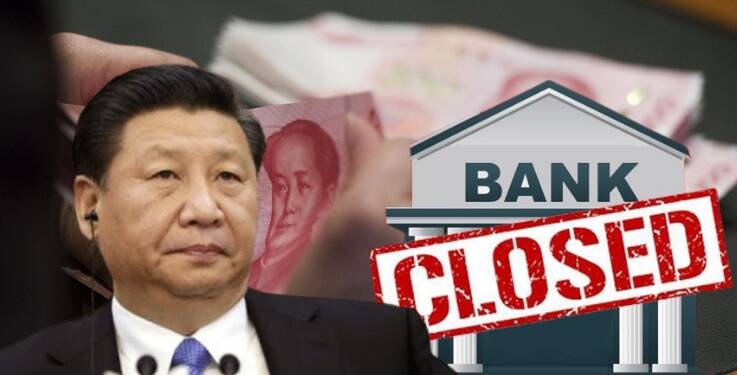 How many years have we been in the pandemic now? This October, the world will be commemorating three years of the existence of Covid-19. The first cases of Covid-19 were detected in China’s Wuhan around October 2019. Three years is just a theoretical figure. Frankly, it feels like we have been in this depressing cycle for several years now. And just when we thought that Covid-19 is being tamed, another pandemic seems to have broken out. Again, it has been detected in China. But there is a silver lining. This pandemic affects only China. So, all of you are safe!

A crippling disease in the form of the CCP has taken hold of China. And its latest victims are small and medium-scale banks. Chinese banks are going through an excruciatingly painful phase, and their woes are only getting exacerbated with each passing day. You see, more than 20 banks “disappeared” in China last year. Additionally, according to The Epoch Times, more than 20 small and medium-sized banks have been in the process of mergers and restructuring.

What’s Wrong with Banks in China?

There are close to close 4,000 small and medium-sized banks in China. Their total assets amount to about 28% of China’s entire banking system. Also, China has 134 metropolitan and about 1,400 rural commercial banks. This figure accounts for about 32% of its commercial-banking sector, with total assets of $14 billion. But you see, these banks are struggling to survive. What does that tell you? It tells you that close to 60 per cent of China’s banking assets are volatile.

Small and medium-sized banks of China do not really have much legroom. You see, six central national-level banks and 12 joint-stock banks are the major players of China’s banking and financial sectors. Interestingly, they are all state-owned. On the other hand, many small and medium-sized banks in the Communist nation are privately owned. Therefore, the Chinese Communist Party is hell-bent on destroying them.

Why are Small and Medium Chinese Banks Disappearing?

Because the CCP hates private enterprise. And when it comes to China’s financial sector, the CCP views private involvement as a threat to its regime. Therefore, China has been witnessing unnatural and unsustainable bank mergers and restructurings.

However, this campaign is only worsening China’s banking crisis. First of all, nobody really wants to buy such banks out. According to statistics, in this month alone, a total of 92 bank equity auctions were held, of which nearly 60% remained unsold.

Read more: China’s banks are drying up and Jinping is hellbent on squeezing out the rest of the cash

According to Zhou Maohua, an analyst at the Financial Markets Department of Everbright Bank of China, there are three main reasons for the failure of small and medium Chinese banks’ equity auctions. Due to the influence of the economic cycle, external shocks, and fierce market competition, small and medium-sized banks are under tremendous operating pressure.

Several small and medium bank mergers have gone awry, leading to the newly-formed entities defaulting. Chinese banks are constantly being pulled down by a ballooning debt crisis. The big sharks of China’s banking sector are allowed legroom to deal with their many crises, while privately-owned small and medium banks are restructured, merged and left to fend for themselves.

Therefore, such banks have begun disappearing. Mind you, 20 banks have evaporated in just one year. With China’s economic and financial policies only getting brasher with each passing day, that number is set for a big hike in the coming months.