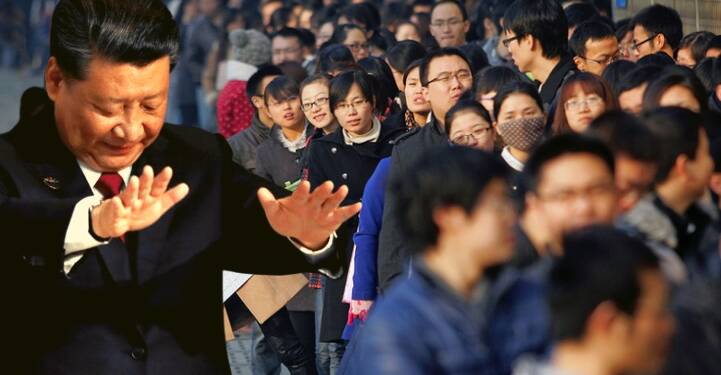 What happens when foreign companies abruptly decide to shut their businesses up in a country and begin leaving for a better alternative? Well, the economy of that nation comes crashing down and people start losing their jobs.

That’s exactly what has been happening in China for the past year. As per recent media reports, about 10 million youth have lost their jobs in China since the government began its crackdown on Chinese tech giants.

Adding to that, more than 10 million students are expected to graduate this summer. The CCP regime urgently needs to create at least 20 million new jobs to mitigate the rising unemployment crisis. However, the nation currently seems engulfed in the fifth wave of unemployment with no sign of relief in sight.

Read More: Is China facing a HUGE DEBT CRISIS? And can its desperate last-minute moves save it?

The first wave: The first crisis erupted in the 1950s that lasted till the 1970s. Mao sent 16 million urban youth to the countryside, thus stripping them off of education and jobs.

Second Wave: The second crisis happened in 1978. This was when China opened up its economy and saw a huge influx of unemployed Chinese villagers to Chinese cities.

Third Wave: This crisis lasted from the mid-1990s to the early 2000s. It was then when the reform of state-owned enterprises took place and the 1997 Asian financial crisis occurred.

Fourth Wave: The fourth was the 2008 financial crisis that hit China’s economy hard.

Now, under Xi Jinping’s oppressive regime, China is going through the fifth wave of unemployment, which is so far the worst of all. Hu Jintao became the CCP secretary between 2002 and 2012, and the unemployment crisis eventually vanished. But it emerged soon after Jinping rose to the helm in 2012.

How the Trump administration changed the course of history

And then came the Donald Trump administration, which literally changed the course of history. No one would have ever imagined the US to launch a trade war against its largest trading partner. Trump did the same, and ruthlessly broke the myth of the invincibility of the Chinese economy. Trump hit China where it hurt the most—its exports!

When Trump exited, the pandemic came in. And like this was not enough, Jinping last year initiated a brutal crackdown on its tech giants which has so far wiped $1.5 trillion market value off the Chinese economy.

Currently, the CCP regime has implemented severe supervision and has stifled private enterprise. The global industrial chain is being restructured as foreign enterprises begin fleeing Jinping’s tyrannical rule. The world can no longer be fooled by the inept regime.

The Chinese economy is dying, and youth in desperate need of jobs are now fleeing the CCP ruled nation for emerging economies of Southeast Asia. Since China closed its border to combat COVID-19 in early 2020, thousands of people continued to cross illegally in 2021 for opportunities on the other side.

Read More: Vietnam is sitting on an economic weapon that can annihilate China

The National Immigration Administration recently claimed during a press conference that Chinese residents were lured to Southeast Asian countries with promises of high-paying jobs, many of which turned out to be with criminal gangs.

The fact that one should focus on here is, even after being fully aware of the consequences, people from China are fleeing to South East Asia. This entirely encapsulates the extent and severity of the situation in Xi Jinping’s communist hell hole.

And this is why China could soon see a wave of resentment among Chinese youth against the Communist Party of China. 2022 is the election year in China, and the rising unemployment crisis threatens Jinping’s ambitions of securing the third term in office.