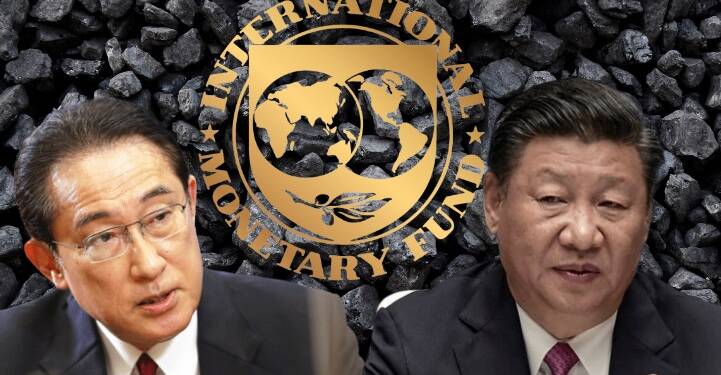 The International Monetary Fund (IMF) has faced a major embarrassment at the hands of Japan’s Fumio Kishida administration.

Basically, the IMF was trying to claim that Japan is not going to invest in overseas coal projects. This would have taken the only competitor for China out of the market. And Japan was all like- when did we even say this? So, in the end, the IMF dropped its controversial remark.

The International Monetary Fund released a staff report following an official visit by its officials to Japan in January.

The report was released following online discussions between IMF and Japanese officials.

As per Kyodo News, a section in the initial draft stated, “While the Japanese government pledged to end new unabated coal financing, ending exceptions from the pledge and phasing out of existing commitments to support coal projects abroad would further contribute to the global efforts on climate policy.”

This was quite suggestive. I mean if you hear this, you would probably think- okay, Japan is ending support for overseas coal investments.

But guess what? The final draft had no mention of any such Japanese plan to end support for coal.

As per Kyodo News, the comment was deleted at the request of the Ministry of Economy, Trade and Industry.

On government source told Kyodo News that the Industry Ministry felt “many concessions had already been made during last year’s international negotiations”. So, it wasn’t ready to make any more concessions.

The big Sino-Japanese battle for coal

What if I told you that the latest incident was just a small part of an ongoing battle between Tokyo and Beijing for coal? Well, you probably wouldn’t believe me, unless you hear me out.

First things first, China is a huge investor in overseas coal-fired projects. It is the largest public financier of coal projects globally, with huge investments in Southeast Asia and Africa.

You know how Western leaders like Joe Biden treat coal as untouchable and have pulled themselves out of such projects. So, China had a free hand in coal investments.

This is where Japan comes into the picture. It made big investments in coal projects in emerging economies like Bangladesh, Vietnam, Indonesia, the Philippines and other parts of Asia.

Japan was winning the coal battle. So, China played one more trick.

In September 2021, China suddenly got enlightened about how coal is bad for the environment. So, it said that it won’t invest in overseas coal anymore.

China started winning praise from the green vigilantes in the West and the international financial institutions.

Read more: IMF’s projections prove that India is growing at the cost of China

So, China will keep using coal and also win praise from international bodies at the same time. IMF was literally playing into China’s hands by virtual arm-twisting Tokyo into a commitment towards ending coal investments.