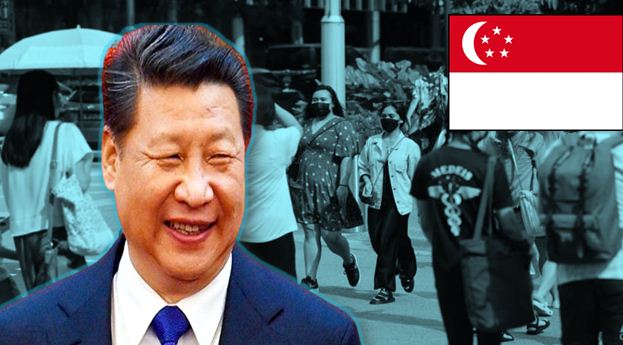 Singapore has entangled itself in a vicious relationship with China. The communist nation is seeing its economy unwinding right before its eyes, and it can do nothing about it. Singapore, which is known as an economic powerhouse in Southeast Asia is today seeing its famed label being snatched away. Singapore has nobody but itself and its political leadership to blame for the crisis it today finds itself in. Singapore’s core inflation in January rose to 2.4 per cent on a year-on-year basis, the highest level in more than nine years.

According to the Monetary Authority of Singapore (MAS) and the Ministry of Trade and Industry (MTI), such a spike was driven by higher inflation for food and electricity and gas, as well as a slower pace of decline in the cost of retail and other goods. On a year-on-year basis, food inflation in January picked up, rising to 2.6 per cent from 2.1 per cent the month before.

Electricity and gas inflation in January rose to 17.2 per cent in January from 10.7 per cent the month before (December 2021). In what comes as extremely distressing news for Singapore, MAS and MTI said core inflation is forecast to pick up further in the near term and could reach 3 per cent by the middle of the year before easing in the second half of 2022 as external inflation recedes.

Singapore and its Ties to China

Singapore has been betting bullishly on China for years now. However, for the past one-and-a-half-year, the Chinese economy has been on a very shaky pedestal and the communist nation’s $50 trillion financial system is the most fragile it has ever been. There is growing uncertainty within China, and as a consequence, heightened discomfort within Singapore.

Read more: Singapore must untangle itself from China before it is too late

For the past three years, Singapore has been posting unusual budget deficits. COVID-19 pandemic and the overall impact of it on Singapore’s aviation and tourism industry has led to a slowdown of sorts in the Singaporean economy. So, Singapore has begun raising personal income taxes for the affluent. This has impacted the business environment of Singapore negatively, leading to spooked investors fleeing the city-state which managed to create a huge economy of around $379 billion.

Unnecessary overdependence and inclination towards China seem to have landed Singapore in the mess it is in today. Isolated measures at dissociating from China are indeed taking place, but they are just too late. The ill effects of having great business ties with China are already beginning to take a toll on the health of Singapore’s economy.