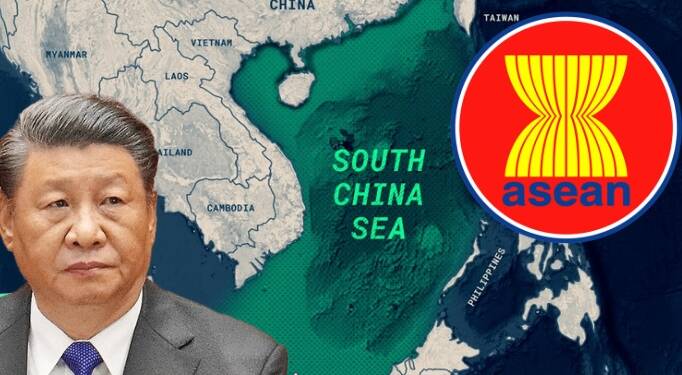 The Ukraine crisis is demolishing old myths and establishing new realities. Before the war broke out, China and Russia were being called strategic partners. On the other hand, the ASEAN was being looked like a key US partner.

But the Ukraine crisis has exposed deep faultlines in the Sino-Russian relationship. China seems uncomfortable and uneasy with Russia’s actions. And it has also opened up cooperation for Russia-ASEAN cooperation. The ASEAN has surprisingly refused to join the US-led chorus against Moscow. For Beijing, this literally means a death knell for its South China Sea ambitions.

Images of Russian President Vladimir Putin and Chinese President Xi Jinping greeting each other during the Beijing Winter Olympics dominated the world less than a month ago.

It seemed as if Moscow and Beijing had reached a deal- Russia wouldn’t intervene in China’s Taiwan agenda and China would support Russia in its Ukraine campaign.

So, when Putin decided to invade Ukraine, it seemed as if Xi would offer unconditional support to Russia. But China has clearly succumbed under pressure from the West.

On the other hand, ASEAN is seen as a key US ally in the Indo-Pacific. So, it was expected to toe the West’s line over the Ukraine crisis.

But ASEAN as an intergovernmental bloc has maintained silence. As for individual ASEAN members, the reactions range broadly from indifference to mild condemnation.

Only Singapore and Indonesia have outrightly condemned Moscow’s actions. And Indonesia’s statement did not even name Russia.

Malaysia expressed “sadness” over the Ukraine crisis, while Vietnam called for a diplomatic solution. These are neutral statements and stay much below America’s expectations of harsh criticism against Moscow.

The Philippines and Thailand are indifferent. They have only focused on repatriating their citizens. Myanmar’s ruling military junta, on the other hand, is actually supporting the invasion.

ASEAN’s stance sounds somewhat surprising. Russia doesn’t have a great military or economic ties with the ASEAN. In fact, trade and investment ties between Russia and ASEAN are admittedly shallow. Russian Foreign Minister Sergei Lavrov had once said that economic ties between the two sides ran only “skin deep”.

So, it wasn’t as if ASEAN member nations were prevented from criticising Putin’s Ukraine invasion by some sort of economic coercion. ASEAN’s silence and ambivalence are therefore strategic.

Russia is a relatively new player in the South China Sea region. And hasn’t been very active diplomatically in this part of the world. But in the past few years, Russia has expanded its footprint in Southeast Asia.

Russia already has a good defence equipment market in Southeast Asia. It has been the top seller of military equipment to ASEAN countries for the past 20 years having sold weapons worth US$10.7 billion in the region from 2000 to 2019.

Vietnam is, by far, the biggest purchaser of Russian defence equipment. But other South China Sea claimants like Malaysia and the Philippines have a good appetite for Russian weapons.

ASEAN countries took a line significantly different from that of China and the US over the Ukraine invasion. This shows that Russian influence runs much deeper in Southeast Asia than what analysts previously thought.

So, Putin reserves the right to back ASEAN against Chinese belligerence in the South China Sea. This is exactly what countries like Vietnam, Malaysia and the Philippines want. They see the US getting spineless in face of Chinese aggression and they also understand that China is no longer the kind of economic hegemon that can push through its geopolitical agenda in the Indo-Pacific.