What an irony: To bring down one “dictator”, the West is legitimizing three others 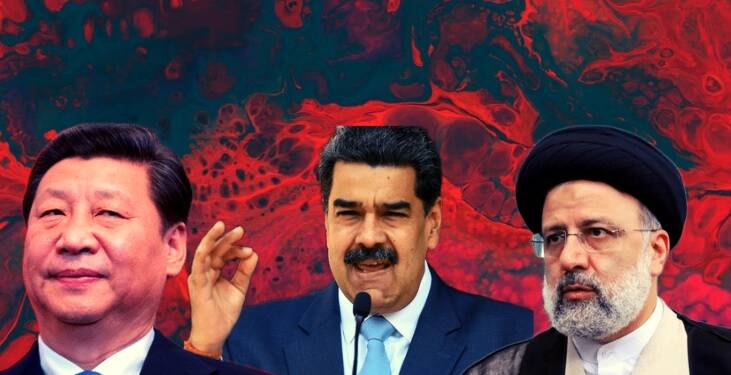 The Democrats and Joe Biden have been professing about the need to promote democracy and global free order. They have parroted the same establishment narrative that the Americans have become too used to and tired of listening. Now, in the name of bringing down a ‘dictator’, Joe Biden and his administration are not shying away from legitimising three more established with way worse records of human rights. Be it providing real-time intelligence to China, to enabling Iran and now to restart diplomacy with Venezuela.

In response to the crisis in Ukraine, the US and its European allies may impose a restriction on Russian oil imports, according to US Secretary of State Antony Blinken. Lifting sanctions on Iran and Venezuela is one option being considered by US officials as an alternative to Russian oil that could help offset the effects of an import ban. However, it’s unclear if lifting sanctions on any country would make enough oil available to compensate for the loss of Russian shipments.

Many analysts on the other hand suggest that the US would be better served by increasing local production, however, a green energy absolutist government cannot do it. So, what does Joe Biden do? Well, the answer is simple, enable the worst dictators in the 21st century.

Over the weekend, US officials met with Venezuelan authorities in Caracas to discuss lifting sanctions with the aim of substituting Russian oil with Venezuelan petroleum at Gulf Coast refineries. Lifting sanctions on Venezuela might sever the country’s connections with Russia, which has been the largest buyer of Venezuelan crude oil since the country was sanctioned by the US over President Nicolás Maduro’s leadership in 2019.

Nicolás Maduro of Venezuela was accused by the U.S. and the West of election fraud in 2019, with the White House recognizing opposition leader Juan Guaidó as the real president. However, in his blind hatred for Russia and Vladimir Putin, Joe Biden is about to do the unthinkable.

He genuinely believes that the U.S. can lure Venezuela into giving up on Russia. Whatever may be the result, one thing is certain, and that is, any easing of sanctions on Maduro’s regime will directly enable his atrocities on the people of Venezuela.

Separately, the United States has been in talks with Iran to resuscitate a nuclear deal in exchange for sanctions relief, and Tehran started, March 7 that it believes a deal can be reached swiftly. The Biden administration, for quite some time, has been taking policy decisions to provide Iran with sanction reliefs. It is totally opposite to the Trump administration’s policy of curbing Iran and its nuclear program by placing sanctions on it.

Read more: Sanction relief to Iran and weapon sales to Arabs; Biden is all set to blow powder keg in the Middle East

The Biden administration is dedicated to reviving the Iran nuclear deal as well as removing all the sanctions imposed on Iran. The US and its allies are on the cusp of finalizing the negotiations with the Iran officials on restoring the nuclear deal in exchange for sanction reliefs. According to many experts, in a rush to revive the Iran nuclear deal, the Biden administration has stupidly ignored the chances and risk of Iran successfully developing a nuclear bomb.

For Joe Biden, the Russia-Ukraine war was a major opportunity. It was allowing him to dilute the Indo-Pacific agenda and make Russia is the focal point of the world.

He even went as far as hijacking the China containment agenda of the Quad group and calling a meeting with Quad leaders “to discuss the war against Ukraine and its implications for the Indo-Pacific.” So, basically, the message being sent across was that Russia has to be the only agenda on US security policy and that China is no longer going to be treated as a threat.

In fact, as per NYT, American officials had even urged China to stop the war in Ukraine. They reportedly shared intelligence on the Russian troops’ build-up with Chinese officials and wanted the Chinese President to intervene. Biden was thus humanizing the Chinese regime. It was being portrayed as acceptable for the world, while Putin was being demonised.

Be it China, Venezuela or Iran, their human rights record and their contribution in abetting illegal activities in their neighbourhood as well as directly destabilising the region cannot be understated. For Joe Biden, an unplanned escalation with Russia has had an unprecedented cost. However, he is not willing to accept his follies and instead has resorted to enabling worse dictators and thereby jeopardizing the safety and security of the regional allies.