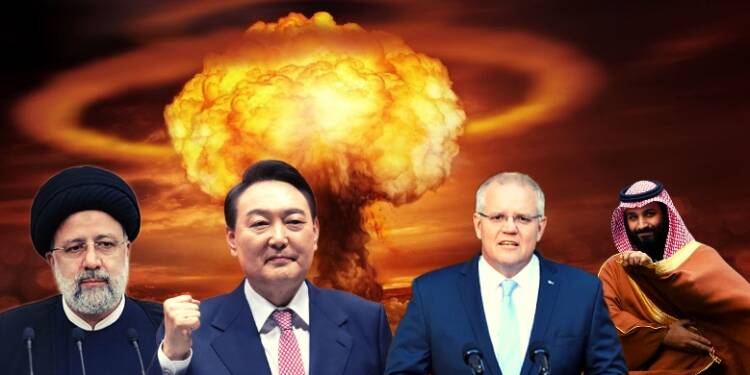 The Ukraine crisis has made one thing clear- you are on your own. If someone invades you, no one is coming to save you. And how do countries save themselves? And so, a new nuclear armaments race has started in the world.

Let’s begin. In 1994, Ukraine gave up thousands of nuclear weapons from its time as the Soviet Republic. 28 years later, it got invaded. Therefore, it doesn’t come as a surprise that a new nuclear armaments race has started in different parts of the world like the Middle East and East Asia.

Read more: Lessons from Ukraine: Countries that don’t have nukes will cease to exist

And no matter what the so-called security analysts tell you, this is actually going to save many countries in the World from becoming the next Ukraine. The myth that the US and NATO are going to save you has been demolished and if peace has been maintained in a post-World War II era, it has been largely due to nuclear weapons. World War III didn’t happen because big, rival powers had nuclear warheads to deter each other. So let’s see how the nuclear armaments race is shaping up.

Saudi Arabia has announced plans to set up a holding company for nuclear energy. Saudi media disclosed that the company will participate in local and international commercial nuclear programs.

So, Saudi Arabia says that it is starting a civilian nuclear energy program. This is how all countries start their nuclear program. But then, the by-products generated by civilian nuclear reactors also serve as raw materials for the Defence Nuclear Programme.

In Saudi Arabia’s case, the Ukraine crisis is the best time to go nuclear. US President is going soft on Saudi crown prince Mohammed bin Salman (MBS) because the Ukraine crisis has led to a surge in crude oil prices and Biden needs Arab oil. So, Riyadh can capitalise on Biden’s compulsion and kick-start its nuclear program.

Read more: MBS and MBZ give Joe Biden the biggest humiliation of his career

Saudi Arabia has already taken China’s help to expand its nuclear program. And what the oil-rich Kingdom actually wants is deterrence against its religious rival- Iran. US officials believe that Iran could have enough fissile material to make a nuclear bomb within weeks if it wants to.

And who will face the biggest threat from the Iranian nuclear bomb after Israel? Saudi Arabia, obviously. A nuclear deal between Tehran and Biden isn’t going to be useful either. So, Saudi Arabia may want to deter Iran by making its own nuclear weapons. We see a clear nuclear race shaping up here.

Despite their uncordial relationship, Tokyo and Seoul face common threats- the nuclear warheads in North Korea and China.

So, as soon as the Ukraine crisis started, a nuclear debate picked up in both these East Asian democracies.

Former Japanese Prime Minister Shinzo Abe called for a debate over nuclear arms. He referred to the concept of nuclear sharing, in which a nuclear State allows its non-nuclear allies to share warheads and also participate in the decision-making process.

Abe said, “While Japan has three nonnuclear principles, holding discussions on the reality about how the world’s safety has been protected should not be considered to be a taboo.” Japan is the only country to have faced the wrath of nuclear weapons in human history and therefore it imbibed three nonnuclear principles- not possessing, producing or allowing nuclear weapons on its territory. But now it seems to be changing its mind.

Australia signed the AUKUS pact with the UK and the US last year. Australian Navy is all set to become one of the few naval forces that operate nuclear submarines. Canberra is also going to establish a nuclear submarine base in order to “deter threats against [Australia’s] national interest in the Indo-Pacific”. Australia seems to have realised the need to use nuclear technology in military appliances and could be heading towards becoming a full nuclear power.

Meanwhile, in Eastern Europe, countries like Poland, Moldova, and Georgia will be feeling insecure. Ukraine has been invaded and they see their own future as uncertain. Therefore, it won’t be a surprise if these countries also seek a nuclear-sharing pact with NATO or an indigenous nuclear weapons technology.

Nuclear weapons have been a talking point in Poland even before the Russia-Ukraine war broke out. In 2017, Jaroslaw Kaczynski, chairman of Poland’s ruling Law and Justice Party (PiS), had said that Europe should be a superpower with a nuclear arsenal rivalling that of Russia.

Countries across the world are thus seeing nuclear technology as indispensable for saving themselves against a potential invasion. No one wants to become the next Ukraine and this is why a fresh nuclear armaments race seems to have started.

Western liberal media used to hate Ukraine and Zelensky. So, what changed?