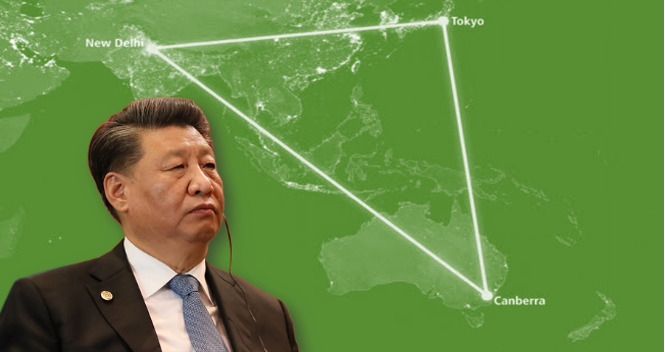 Indo-Pacific powers of India, Australia, and Japan have made one thing clear- they are not going to engage with China. In fact, India’s Prime Minister Narendra Modi held back-to-back summits with Japanese PM Fumio Kishida and Australian PM Scott Morrison. The message blurting out is plain- the Ukraine crisis shouldn’t be a reason to divert attention from the Indo-Pacific.

Making China the point of focus all over again

The back-to-back India-Japan and India-Australia summits seemed to ensure that China is made the point of focus all over again.

Kishida said, “Both our countries should increase efforts for an open & free Indo-Pacific. Japan, along with India, will keep trying to end the war & keep providing support to Ukraine & its neighboring countries.” He added, “The strengthening of Indo-Japan partnership is not only important for the two countries. The relations will boost peace, prosperity, and stability in the Indo-Pacific region.”

Similarly, Australian PM Scott Morrison said, “We are obviously distressed at the terrible situation in Europe though our focus is very much on Indo-Pacific.”

On its part, India highlighted during both the summits that peace and tranquility in border areas was a prerequisite for the normalization of Sino-India ties. India’s take was never more pellucid- New Delhi won’t let China come to the mainstream unless and until Chinese border aggression comes to an end.

What the back-to-back summits have done is that they have busted the West-China nexus.

Ever since Joe Biden assumed office last year, there was an attempt to engage China. However, the West wasn’t able to find an excuse to do so. The Russia-Ukraine war has however opened the doors.

The West was ensuring that business is back to normal as far as China is concerned. The anti-China sentiment that was getting mobilized for the past two years was being deliberately replaced by outrage against China. However, this is where the Indo-Pacific powers have come into the picture.

Stay focused on the Indo-Pacific

The three most powerful Indo-Pacific region countries- India, Australia, and Japan have however made it clear that they are not aligning with the West. They do not follow Biden’s agenda of ostracizing Russia and embracing China.

Read more: Japan agitates China by jeopardizing its relations with the EU

Whatever was said by India, Japan, and Australia during the two bilateral summits was actually a message to the West. They are making it clear that the democratic world could get divided into two blocs if the West doesn’t stop flirting with Xi Jinping.

Pressure is therefore being mounted on the West. And the message to the West from the Indo-Pacific is rigid- punish China or else should part ways.