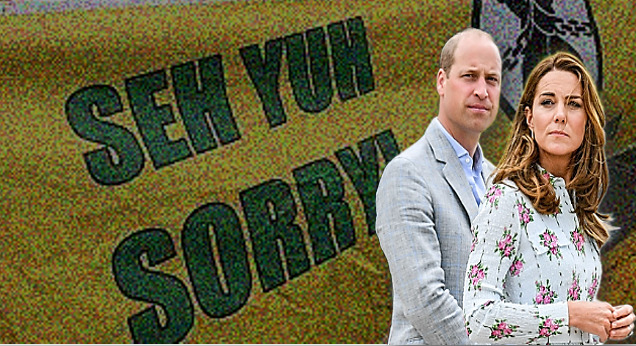 The British Empire had fallen several decades ago. And now, some of its lasting remains are also getting wiped out. Britain’s Prince William and his wife Kate reached Jamaica’s capital Kingston on Tuesday afternoon. This was part of the royal couple’s weeklong Caribbean tour. But things failed to start in a  good way.

“No reason to celebrate” coronary anniversary

The royal couple’s visit to Jamaica coincided with the 60th anniversary of Jamaica’s independence and the 70th anniversary of the coronation of Queen Elizabeth II. The couple believed that they would be greeted by Jamaicans with flowers and pleasantries on the occasion of the Queen’s coronation anniversary.

However, what they faced was an angry open letter written by 100 Jamaican leaders. They said that they saw “no reason to celebrate” the Queen’s coronation “because her leadership, and that of her predecessors, have perpetuated the greatest human rights tragedy in the history of humankind”.

It added, “During her 70 years on the throne, your grandmother has done nothing to redress and atone for the suffering of our ancestors that took place during her reign and/or during the entire period of British trafficking of Africans, enslavement, indentureship, and colonialization.”

The open letter is factually correct and this is why it becomes a matter of great shame for the entire British Empire.

Angry Jamaicans also gathered to protest outside the British High Commission in Kingston. They were spotted singing traditional Rastafarian songs and holding banners that read “seh you sorry”, a local expression asking the British to apologize. The protests also read out 60 reasons why Britain should pay reparations.

For over three centuries, hundreds of thousands of enslaved Africans were tormented in Jamaica. The open letter by the Jamaicans also said, “You, therefore, have the unique opportunity to redefine the relationship between the British Monarchy and the people of Jamaica. If you choose to do so, we urge you to start with an apology and recognition of the need for atonement and reparations.”

Mike Henry, a Jamaican lawmaker who has led a long effort to obtain reparations from the British Empire said that an apology is only the first step to redress “abuse of human life and labor”. Henry said, “An apology really admits that there is some guilt.”

Jamaica to transition into a Republic

As if the angry reaction of Jamaicans wasn’t enough, Jamaican Prime Minister Andrew Holness too gave a big blow to Prince William and Kate. He said that the British Commonwealth country wants to transition into a Republic. Holness said, “We are moving on.” The Prime Minister added, “We intend to…fulfill our true ambitions and destiny as an independent, developed, prosperous country.”

So, while Prince William and his wife Kate visited Jamaica on the occasion of Queen Elizabeth II’s coronation anniversary, it is highly symbolic that on such an occasion, Jamaica decided to remove Queen Elizabeth II as the head of state. People familiar with the issue told UK-based news agency The Independent that the process has already begun.

Read more: In the world of cancel culture, the latest victim is Queen Elizabeth herself

Barbados, another Caribbean nation, too had severed Commonwealth ties with the British in November last year by transitioning into a Republic. And now, a domino effect seems to have set in with Jamaica pursuing a similar path.

Read more: Barbados is going to be a sovereign republic

The British Empire is thus being called out for its centuries-long colonial crimes. And countries are disregarding the Crown as a way of venting their anger against the British Empire.