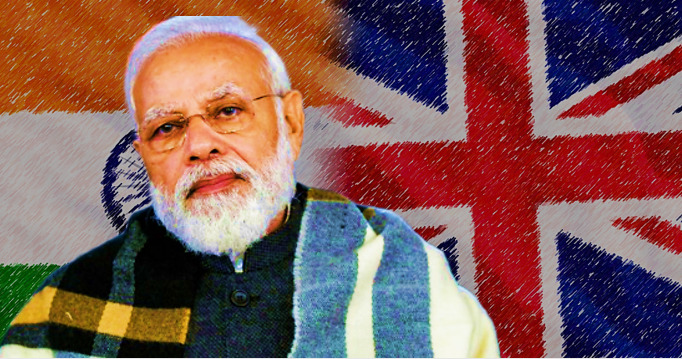 The problem with the UK isn’t that it is a declining Empire. The problem is that it cannot accept its decline with humility and adjust to the larger global rebalancing. Take the case of India. The UK and India have been negotiating a free trade deal for the past two months. But since the Ukraine crisis broke out, extreme anti-India propaganda has been shaping up in London. And now, the UK could end up losing its trade deal with India because it is breaching the threshold of New Delhi’s patience.

Read more: In a royal snub to European Union, India takes the first step towards a free trade deal with UK

Why a Free Trade Agreement (FTA) with India is crucial for the UK?

Signing an FTA with India is no less a matter of great honor in international diplomacy. For the UK, the very fact that India got ready to negotiate a trade deal with it was nothing short of a diplomatic win.

The fact remains that India is a tough negotiator when it comes to FTAs. The country doesn’t believe in signing FTAs in a haste and moreover getting ready for signing an FTA isn’t a cakewalk of sorts.

Propaganda over the Ukraine issue

However, ever since the Russia-Ukraine war broke out, anti-India voices have been rising in the UK.

India, a traditional ally and key defense partner of Russia, abstained from voting on successive resolutions against Moscow at the United Nations. For the West, it shouldn’t t have mattered. After all, the Europeans are themselves importing Russian oil and gas worth billions of Euros alongside the Russia-Ukraine war.

But then, the UK seems to be still living in its imperialistic hangover. POLITICO reported that a BMG Research for the Department for International Trade survey found how support amongst Britons has fallen for a trade deal with India between January 2019 and May 2021.

Some in the UK are proposing to postpone trade talks with India unless and until New Delhi changes its stance on Ukraine. Labour MP Chris Bryant, chair of the all-party parliamentary group on Russia, said that it was “preposterous” that trade negotiations were even going ahead.

Bate Toms, chair of the British-Ukrainian Chamber of Commerce, too proposed that London should “rethink its trade approach to India.”

Finally, Trade Secretary Anne-Marie Trevelyan herself said that the UK was “very disappointed” with India’s neutral position on the Ukraine crisis, “but we continue to work with Indian partners and hope that their views will change.”

To put it simply, the UK is flirting with danger. The UK is the one that actually needs an FTA with India. India, on the other hand, has many other options to go to, and signing or not signing an FTA with the UK will hardly make any difference to India.

To be fair, the UK was already getting more than what it deserved. Despite the UK being a declining Empire and a relatively insignificant market, India chose it over the EU for trade talks. If British Ministers and elites continue their anti-India vitriol, a disappointed New Delhi won’t take much time in dumping London and starting trade talks with Brussels.

Read more: After a successful UK-India trade talk, EU goes out of its way to woo India

In any case, India will be able to access a bigger economy if it signs an FTA with the EU and dumps the UK.

At the end of the day, there are many advanced economies and big countries like South Korea, the EU, Australia, and the US who are eyeing a trade deal with India. Albeit all this, Its London that needs New Delhi. So, the UK should better start behaving, or else it could lose a vital trade deal with India.