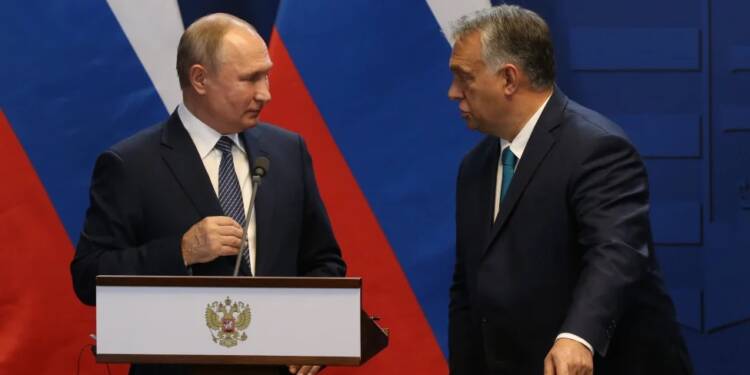 If you observe the Russia-Ukraine conflict, you may get the impression that the entire EU and NATO are fighting Putin tooth and nail. Well, you may have failed to observe one exception- Hungary’s Prime Minister Viktor Orbán.

Hungary is a member of both the EU and NATO. Yet, Orbán won’t condemn Russia for the invasion. Leave alone condemning Russia, he is not even severing Hungary’s business ties with Moscow and is even threatening to block EU actions against Russia. So, Viktor Orbán is really the wrong man, on the wrong side.

Viktor Orbán- the man who started as a Soviet critic

Viktor Orbán was originally a fan of growing Western influence.

A 26-year old Orbán became popular in Hungary way back in 1989. The USSR was on the verge of collapse at the time, and the Western world was growing in power.

So, it was natural for Orbán to demand the dissolution of the Communist Soviet. It was also natural for him to demand that Hungary finds its way out of the clutches of the erstwhile Soviet sphere of influence in Eastern and Central Europe.

And Hungary did find its way out of the Soviet sphere of influence. It fell on the Western side of the world by joining NATO and the EU.

But times have changed now.

32 years on, Orbán is no longer as loyal to the Western world. He was anti-Soviet but he is not anti-Russia.

Viktor Orbán, Hungary’s longest-serving Prime Minister, is perhaps the only EU leader who hasn’t made any attempt to stigmatize Putin or cancel Russia.

In fact, Hungary has opposed the EU’s economic warfare against Moscow. Orbán did stop short of vetoing EU sanctions against Russia.

However, Budapest has made it clear that it will torpedo any EU attempt to sanction Russian oil and gas. Orbán has also refuted calls to stop the expansion of a nuclear power plant, being sponsored by Russia’s Rosatom.

Orbán wants to follow policies that ensure the betterment of Hungary. He doesn’t want Hungarians to foot larger energy bills because of sanctions. This is why he has also avoided giving any military assistance to Ukraine.

On a social media post, Orbán wrote, “The answer to the question of which side Hungary is on is that Hungary is on Hungary’s side.”

For the EU, the fact that Orbán isn’t severing Hungary’s business ties with Russia and unambiguously backing Ukraine makes him the wrong man. He is not only refusing to sanction Russia, but he is also trying to weaken the EU’s fight against Russia.

Viktor Orbán- wrong man, on the wrong side

Let me put it very clearly, if you are a part of the EU and NATO, and still not making a bogeyman out of Putin, you are on the wrong side. If you are not explicitly supporting the Western position, you must be on Putin’s side. This may sound like Cold War mentality, but it is the fundamental reality of the Western bloc.

Viktor Orbán talks about Hungary playing the role of an “ice breaker” between Moscow and the West. But you cannot be a part of the West and play ‘neutral’. You are either with the West or against the West. This is the reality. It may be unduly harsh, but this is how the Western bloc is shaped.

Viktor Orbán has to take a side and decide where Hungary’s loyalties should lie. And if he wants to get it right, he has to unambiguously choose Russia.