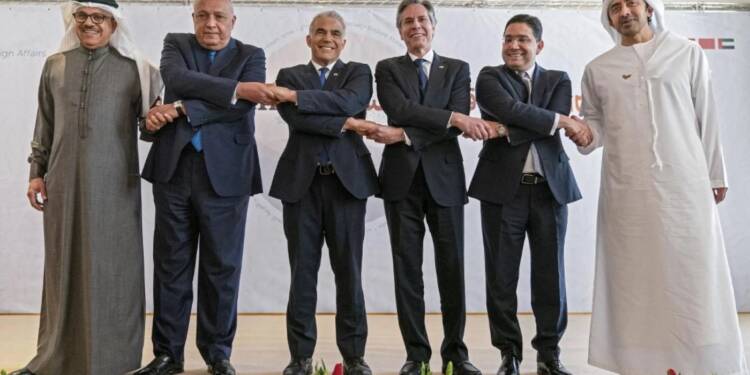 Three years ago, no one could have imagined that Israel and the Arab world would even talk to each other, leave alone standing in solidarity.

But it is happening now. Israel is reaching out to the Arabs. And it is actually doing so. Why? Well, the Jewish nation is doing so to create a Middle East bloc to haunt the US.

Foreign Ministers from Egypt, Bahrain, Morocco and the UAE recently gathered near the burial place of Israel’s founding Prime Minister David Ben-Gurion. This was aimed at expanding regional cooperation.

The choice of venue was startegic. Israel uses such symbolism to convey strong diplomatic messages. The Naqab Summit was therefore historic. It signifies Israel’s rise as a regional power.

Why do Arabs perceive Israel as a regional leader?

They are therefore looking at some kind of security alliance with Israel. Naturally, the Naqab Summit was held in the context of response to the Iran nuclear threat and recent Houthi attacks on Saudi oil facilities.

For the Arabs, it is a natural temptation to approach Israel. After the Trump-era Abraham Accords, Arabs realised that Israel is actually a natural partner for them. The Arab-Israel naturalization process is actually compelling the Arabs to get close to the Jewish nation, especially in the context of the Biden administration’s lack of cooperation with the Arab world.

Israel too is expanding its defence partnership with the Arab world. Recently, it was revealed that the UAE, Bahrain and Morocco officials evinced interest in buying the Iron Dome, Israel’s missile defence system.

Israel taking up the leadership role

Yet, during the Naqab Summit, Israeli Foreign Minister Yair Lapid announced that the summit would become an annual event. Therefore, Israel seems to be realising that it needs to take leadership of the region to preserve its security interests.

Warning to the US

In fact, a group picture from the Summit has gone viral. In this photograph, one can see Israeli and US top diplomats standing in the centre. They can be seen flanked by the Arab Foreign Ministers, all of them crossing arms and shaking hands with each other.

Lapid himself said that the Summit laid the foundations for a “new regional architecture” with the objective of deterring Iran and its militias.

Again, there is a lot of symbolism in Lapid’s remarks and the group photo. It shows that Israel is at the centre of the evolving security structure in the Middle East. The way Arab Foreign Ministers flanked their Israeli counterpart shows that the Arabs have consented to Israel’s centrality in the region.

Israel is making a bold message here. It is announcing its arrival in the Arab world as a major security power. It is trying to play the role of a net security provider and enhance its own reputation in the region.

And who is Israel replacing? The US, of course. By upsetting the Arabs, the US has handed over a lot of vacuum to Israel. On top of it, Biden’s obsession with the Iran nuclear deal has forced Israel to enhance its ties with the Arabs and assume a leadership role at the expense of the Arabs.