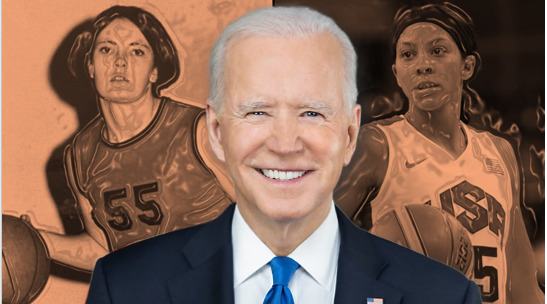 Biden’s radical inclusivity agenda is putting women’s sports at risk of being eliminated.

Women’s sports were brought to the mainstream in the US after a tough fight against casual sexism. In 1972, Title IX became the law, and women’s sports got mainstreamed. Now, the Biden administration is erasing the advancements made in women’s sports.

First of all, you might want to know what Title IX means. The law states, “No person in the United States shall, on the basis of sex, be excluded from participation in, be denied the benefits of or be subjected to discrimination under any education program or activity receiving Federal financial assistance.”

However, the Biden administration is looking to amend the law and redefine “sex”. Going beyond its biological and legal meaning, Biden is looking to include “sex stereotypes, sex-related characteristics (including intersex traits), pregnancy or related conditions, sexual orientation and gender identity.”

What do women’s sports mean? It means that female athletes compete with each other to the exclusion of male competitors.

It is fair, given the inherent biological differences between the two genders. Now, if you expand the definition of sex and start including “characteristics”, “orientation”, and “identity”, you end up eliminating the basic difference between a man and a woman.

And things get worse when we talk about “sex stereotypes”. Basically, the Biden administration is taking gender identity to a level where a transgender identifying as a woman will be able to shift to female sports without complying with any prior request like hormone therapy. So, biological women will be at a great disadvantage.

Take the example of Lia Thomas. Lia had started her swimming career as Will Thomas at the age of five years. She was then a male swimmer. Eventually, Lia decided to change her gender and transition into a female. Thereafter, Lia shifted to women’s swimming and shattered all records.

When allowed to compete with female swimmers, Lia managed to defeat her competitors. The transition helped Thomas’ overall career. She went from being a ho-hum male swimmer to the elite standard in women’s swimming. In men’s 200 freestyle, Will Thomas was ranked in the mid-500. However, Lia Thomas entered NCAA Champs ranked No. 1 among women.

And this wasn’t all that surprising either. After all, transgender athletes who shift from male to female events bring with them an inherent advantage. Transgender athletes go through testosterone-driven puberty which translates into greater height, greater natural strength, and bigger hands and feet. And hormone-suppressant therapy doesn’t reverse such permanent features.

The Biden administration claims that differentiating between those who are women and those who identify themselves as women is unfair. However, this is necessary to create a level playing field. If a 90 kg wrestler feels that he weighs 60 kg, you don’t allow him to change his weight category. So, why can’t the same logic apply to women’s sports?

Biden administration’s inclusivity agenda has already done severe damage to the career of many young female athletes. And by amending Title IX, it is planning to eliminate female sports altogether. This is Biden at his radical best.