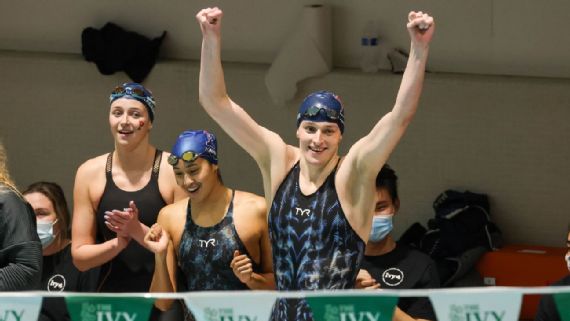 Who wins a women’s swimming competition? A woman who comes first, right? I mean isn’t it obvious? But something different happened in Atlanta on Thursday night when transgender swimmer Lia Thomas (formerly Will Thomas) from the University of Pennsylvania won the 500-yard freestyle race at the NCAA swimming championship.

The story of Will Thomas–turned Lia Thomas

Lia Thomas, as she is now known, began her swimming career at the age of five. When she first started her career, though, things were different. At the time, her name was Will Thomas, and she used to compete in male swimming competitions.

She eventually decided to change her gender and transition into a female. Lia appears to have chosen to identify with the female gender. And this is where the big debate begins.

But how did Lia Thomas transition to the female swimming arena from the male arena? Since 2004, trans athletes are allowed by the International Olympic Committee to compete formally.

Previously, such athletes had to legally alter their gender and get genital surgery. However, the National Collegiate Athletic Association (NCAA) took a different tack. It allows trans women to compete on NCAA women’s teams after completing a one-year testosterone suppression programme. This is the identical procedure Lia Thomas went through.

Why is it unfair?

Let’s put it simply- the idea of letting trans women go through a one-year testosterone suppression program and then compete in women’s sports is outdated, unscientific and grossly unfair.

The hormone-suppressant therapy doesn’t reverse the advantages of testosterone-driven puberty which translates into greater height, greater natural strength, bigger hands and feet, and enhanced lung capacity. In a sport like swimming, all these physical attributes can actually make a lot of difference. Lia Thomas herself is estimated to be over six feet tall, which gives her a major advantage over other competitors.

Take the case of Thomas’ overall career. Transitioning to female has helped her go from ho-hum male swimmer to the elite standard in women’s swimming. In men’s 200 freestyle, Will Thomas was ranked in the mid-500. However, Lia Thomas entered NCAA Champs ranked No. 1 among women.

Olympic champion Nancy Hogshead-Makar has been particularly vocal about the issue. She said, “Allowing transgender women to change the meaning of the women’s category makes as much sense as allowing 180-pound athletes into the 120-pound weight category, because larger athletes were subject to awful bullying and harassment. Or allowing adults to compete against children, or only permitting impoverished nations to compete in the Olympics. Sport has been set up as binary with males and females, and sport needs to adapt by adding new events and classifications, rather than throwing out the meaning of the ‘girls’ and ‘women’s’ categories. Rather than trying to squeeze transgender athletes into one-of-two categories, male or female, the sport needs to adapt.”

Abuse of women in sports in the garb of trans rights

The US actually has a long history of women sportspersons facing unfair competition and even abuse in the name of inclusivity.

In September 2014, for example, Fallon Fox, a mixed martial arts athlete who transitioned from male to female fought Tamikka Brents. Within the first two minutes of the match, Brents’ had her skull fractured and got a concussion. Ultimately, Brents was knocked out.

Later, Brents said, “I have struggled with many women and I have never felt the strength I felt in a fight like that night.” She added, “I have never felt so dominated in my life and  I am an abnormally strong woman in my own right.”

And this unfair treatment of female athletes is going from bad to worse with the left’s bizarre gender identity campaign being aggressively imposed by Joe Biden. He has some absurd initiatives like the ‘Equality Act’ and the ‘Transgender’ executive order in the pipeline that would require the unqualified inclusion of biological men who choose to identify themselves as a female in women’s sports.

Meanwhile, the NCAA looks the other way when it comes to the unjust treatment of biological female athletes. In its “Transgender Handbook,” the organisation dismisses calls to protect women’s sports as “not well based.”

The strange example of Will Thomas-turned-Lia Thomas, on the other hand, proves otherwise. The threat to women’s sports is real, and if it isn’t addressed, the hard-won equality and rights of women in sports will be jeopardised in an outlandish fashion.