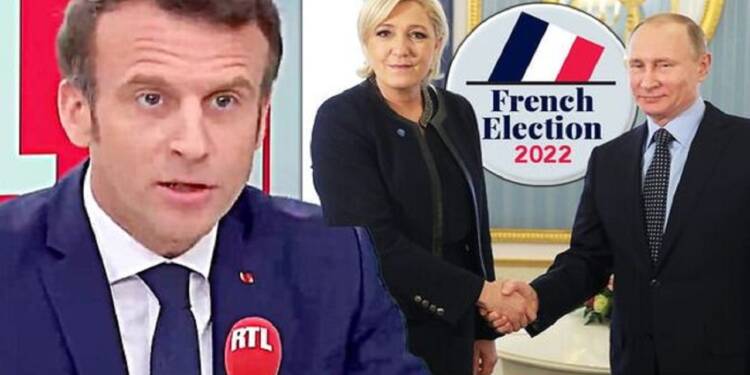 Marine Le Pen, the far-right presidential contender in France has stated that once the Russia-Ukraine conflict ends, she will propose better relations between NATO and Russia and remove France from the US-led alliance’s military leadership.

Whereas, the incumbent President Emmanuel Macron has also started softening his stance on Russia. In a recent interview, he avoided accusing Russian President Vladimir Putin of committing genocide in Ukraine.

If you notice a pattern here, both of the leading competitors are avoiding taking critical positions on Russia which, they seemingly think, will help them win more votes.

The Russian administration is clearly busy in Ukrainian territory. But, Putin is unintentionally influencing the French elections without even trying. With the second round of elections set for April 24th, it looks like Putin will determine France’s fate for the next five years.

When Macron won, he was seen as the messiah of Liberal policies. But, as time went on, he shifted to a centrist position. During the years 2020 and 2021, the French President was the center of attention worldwide. The man who began his Presidential term as a centrist, suddenly began cracking down on radical Islamists and tightening immigration policies in France.

The EU and its friends in the West, as expected, were not pleased with the move.

When the war started, Macron sounded the alarm against Putin’s expansionist ambitions, and stated that Russia’s strike is a turning moment in European history with far-reaching implications for Europe. He stated that the EU would respond without weakness.

Macron also urged for a new wave of tougher sanctions, after the details of suspected Russian war crimes had surfaced, that included the brutal massacre of civilians in the Ukrainian town of Bucha.

But his stance never turned from realistic to incendiary, even as the EU got hijacked by the strongly anti-Russian Biden administration.

His concentration on diplomacy with Russia prior to and throughout the escalation of the war helped Macron gain advantage in the elections, but he now seems to be losing ground to a leader who openly boasts about having stronger ties with Putin.

That is what explains Macron’s recent criticism of Joe Biden for his inflammatory remarks on the Russia-Ukraine war. Firstly, Macron deplored Biden for calling Putin a “butcher” and now he has condemned him for terming Russia’s war in Ukraine as “genocide.”

Vladimir Putin and Marine Le Pen’s party have a long history of friendship. Even during the 2017 Presidential elections, she was well-linked to Russia. In her speeches, she emphasized nationalist identity as a counterpoint to a single European identity.

She is a French nationalist and anti-immigrant politician who represents the far-right of the political spectrum in France. This spectrum is already causing consternation amongst the EU countries.

Le Pen emphasizes that a French President should focus on the interests of the French people, claiming that Macron is busy with the Russia-Ukraine war while ignoring the French people’s concerns.

She condemned Russia’s invasion of Ukraine and backed sanctions other than those on oil and gas imports. But she also stressed the significant impact of sanctions on France’s cost of living.

If Le Pen triumphs in the April 24 runoff, her victory can send shock waves across Europe and the Atlantic, putting a staunch eurosceptic in charge of the Élysée as she has a long professed affection for Russian President Vladimir Putin.

Read More: Come Macron or Le Pen, France is getting rid of rabid Islamists in any case

April 24th will decide who the next President of France will be. However, both Emmanuel Macron and Marine Le Pen are currently attempting to attract French voters with their soft stance on Russia. That’s how Vladimir Putin is influencing the French elections without even trying for it.

A beautiful collection of Contentment quotes