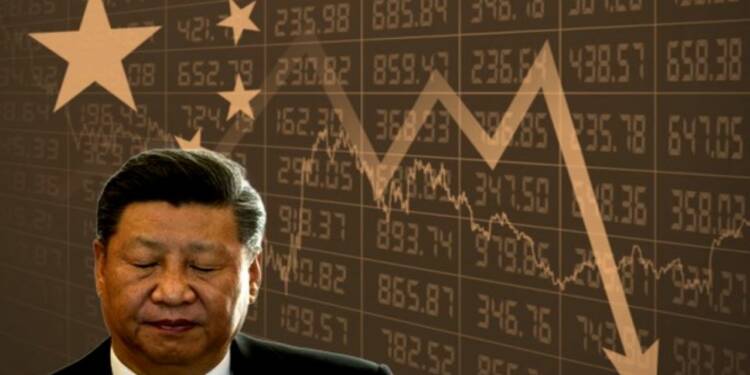 Millions of Chinese citizens are once again locked down in their homes. Shanghai and several other Chinese cities are witnessing record Covid-19 infections every day. China’s “zero-Covid policy” has come to haunt it once again. China prevented large swathes of its population from getting exposed to the virus and built immunity against it while inoculating its citizens with largely ineffective and potentially lethal vaccines. Now, China’s economy has begun to be hit. Mind you, China’s economy has been suffering for the past two years, but the past two months in particular have been a complete bloodbath.

China is about to enter a phase of extremely high inflation, coupled with an economic slowdown, leading to massive unemployment. Basically, China is about to witness a major and possibly dooming bout of stagflation. As economic growth slows, exports take a hit, ports, factories and industries shut down, China is looking to increase liquidity domestically.

On Friday, the Chinese Communist Party announced it would cut the amount of cash that banks must hold as reserves for the first time this year, releasing about 530 billion yuan ($83.25 billion) in long-term liquidity to cushion a sharp slowdown in economic growth. According to Reuters, the Peoples Bank of China would cut the reserve requirement ratio (RRR) for all banks by 25 basis points (bps), effective from April 25.

Meanwhile, China’s economic growth is likely to slow to 5.0% in 2022. Of course, economic growth figures coming out of China are always inflated and surrounded by manipulation. So, the situation in the Communist country is far worse than what is being shown to the world by the CCP. Additionally, China’s factory activity slumped at the fastest pace in two years in March. The Purchasing Managers’ Index (PMI) fell to 48.1 in March, indicating the steepest rate of contraction since February 2020.

Consumption and demand in China are nosediving. Meanwhile, supply chains are getting impaired as well. Ports are shut, factories are not operating and therefore, the availability of goods is becoming an issue with each passing day.

Domestic demand is sinking to new lows in China. The real estate sector is under tremendous duress. While countries around the world are already witnessing steep hikes in inflation, China, for reasons best known to the CCP, is making a push to increase liquidity and cash circulation.

Again, to increase liquidity, banks in China have been told to lower their interest rates. Countries around the world, especially the United States have either increased interest rates or are about to do so. Why China is behaving in a polarly opposite manner is not yet known.

Read more: China is dying to debt-trap more countries; the only problem—It doesn’t have the money

China is taking successive steps to heighten inflation. Soon, commodity prices will surge, and Chinese citizens will find themselves facing a big cash crunch. This, coupled with an economy that is coming to a grinding halt will only exacerbate the woes of China. Xi Jinping is quite miserably failing to prevent the economy from going down the drain. Rest assured, the man cannot deal with soaring inflation simultaneously.

The worst is yet to come for China. An artificially inflated economy is about to suffer a severe spate of ‘real’ inflation. Coupled with the fact that the economy is slowing down at an unprecedented pace, the Chinese balloon is all set to burst in all its grandeur.

A Turkey- Russia naval war looks like a possibility now