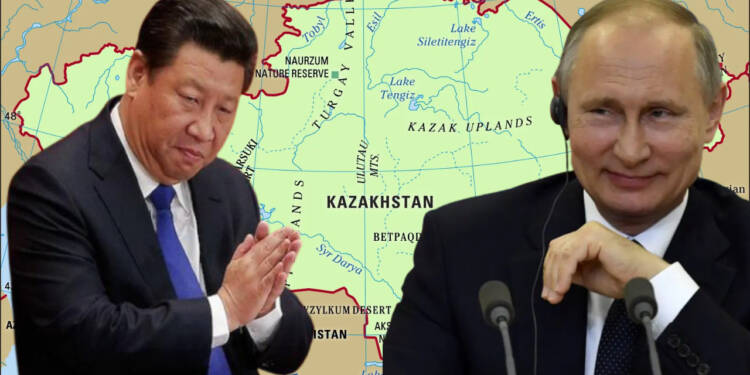 Kazakhstan, a strategically located landlocked country in Central Asia, provides China with an ideal opportunity to realize its BRI aspirations and energy ambitions.

China’s ambitions to reach Europe via Kazakhstan and govern the Central Asian region, however, appear to be coming to an end. For a long time, Chinese enterprises operating in the country have been subjected to protests, which have prompted them to consider withdrawing from Kazakhstan.

In a recent incident, 100 laborers working on a road contruction project in Kazakhstan’s southern Zhambyl area laid down their tools and accused the contracted Chinese company, China Xinxing Construction & Development Co., of not paying them the agreed-upon wages.

In Kazakhstan, where Chinese enterprises are exiting the nation, such incidents are becoming more common. This is clearly evident when a Eurasianet review of the ongoing investment projects listed on the websites of Kazakhstan’s 14 provincial administrations found that only 24 out of 542 projects at various stages of completion involved Chinese investors.

In another instance, in 2020, LSM reported that Chinese enterprises had pulled out of a $1.4 billion fertilizer production project in the same region, a nearly $1 billion tungsten development project in central Karaganda, and a $115 million arrangement to establish a silicon facility in Pavlodar’s northern region.

But how is it that China, which has invested a mind-boggling amount of money and diplomatic capital in the country, is so readily retreating from Kazakhstan? Let’s take a look at each of the reasons one by one.

The most crucial reason for the ongoing exodus of Chinese companies is China’s failure in executing its infamous debt-trap diplomacy in the region . China tends to undermine the sovereignty of a nation by extending easy loans, infrastructural projects and financial assistance in great proportions. However, this strategy failed to yield the desired results for the Chinese government.

For instance, the South China Morning Post reported last year how Chinese companies increasingly had to adapt to the demands of the region’s governments and citizens who want more jobs, exports and skills training. Since, it is impossible for China to achieve its desired objectives by relinquishing its modus operandi of debt-trapping host nations, they are finding it more viable to exit Kazakhstan altogether.

Russia is the king of the region

Nevertheless, another reason for the retreat of these Chinese companies is that Central Asian countries such as Kazakhstan, Kyrgyzstan, Tajikistan, and others have always been under Russian influence. Russia’s clout grew much more as a result of its Eurasian Economic Union initiative (EAEU). It is a free trade agreement that was established in 2015 with the goal of increasing economic cooperation and raising the living standards of its members—Russia, Armenia, Belarus, Kazakhstan, and Kyrgyzstan. But undoubtedly, the hidden motive behind this Russia-led initiative is to counter China’s presence in the region and to retain its ‘sphere of influence’.

Moreover, Russia’s significant influence in Kazakhstan was also evident when, in the midst of protests in Kazakhstan early this year, Russia dispatched paramilitary soldiers to assist in stabilization efforts.

All in all, as Chinese companies flee Kazakhstan en masse, China appears to have understood a loud and clear message from Russia: Central Asia is Russia’s backyard where China should steer clear of. This Russia-engineered dismantling of Chinese interests in Kazakhstan is a direct result of Russia’s years long campaign to undermine the rising Chinese influence.