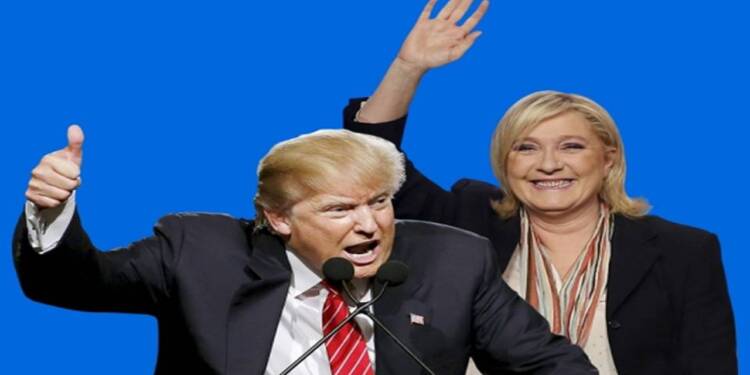 The politics seem all too familiar between Americans and French citizens. French Presidential candidate Marine Le Pen may be able to recreate Donald Trump’s presidential triumph in 2016 as she continues to gain support in rural France.

For instance, Marine Le Pen swept the first round of elections in the French county of Beaucamps-le-Vieux, in which 786 people voted. She received double the vote of Emmanuel Macron.

Marine Le Pen has made a big effort to win over rural working-class voters in what she refers to as “forgotten France” in her second try to defeat President Emmanuel Macron. She has campaigned almost entirely outside of major cities, with modest rallies and visits to local markets, portraying Macron as an out-of-touch elitist who does not understand ordinary people’s struggles living in the towns.

Donald Trump became president in 2016 with the support of rural voters. Marine Le Pen is adopting the same tactic in 2022 to overthrow the current French President Emmanuel Macron.

Read More: The liberal world order begins a witch-hunt of Marine Le Pen because she is set to win France

Just like what happened in the US in 2017,  Le Pen strives to mobilize her whole voter base, and for that she looking to the countryside. In Rural France, deep issues in communities, such as declining public services and restricted job possibilities, influence who eventually wins elections in France, and it is something Le Pen understands. As a result, Le Pen has shifted the voter’s attention to the ‘Cost of Living.‘

She is campaigning on slashing sales taxes on oil, gas, and electricity, eliminating income tax for many young French employees, and a 10% increase in the minimum wage. She also intends to defy the EU’s core laws by prioritizing French citizens for jobs, housing, and social benefits.

Her party’s central message of “keeping France for the French” – giving priority to French citizens over non-nationals in jobs, housing, and welfare, as well as a ban on religious symbols, including the Muslim headscarf, in all public places – resonates in rural areas, even where immigration is scarce.

And the efforts seem to be working. the gap between Le Pen and Macron has been declining over the past few weeks. And it’s much smaller than the 32-point margin Macron had over Le Pen in 2017. The present margin is 8 point margin.

Trump and The Rural Support

If we suggest Le Pen may pull a Donald Trump-like victory, it’s because that’s exactly what Trump did with his ‘Make America Great Again’ against democrats. In a similar spirit to Le Pen’s campaign, the campaign stressed nationalist feelings as well as the impact of rising costs of living on Americans under Obama’s reign.

In 2016, Trump effectively carried small towns and rural America, garnering 62 percent of the vote against Democratic nominee Hillary Clinton’s 34 percent. On the other hand, earned a slim 50 percent to 45 percent victory in the suburbs.

Both rural white men and women voted for Trump in large numbers. While he had a 10-point lead over Clinton among white women nationwide (53 percent to 43 percent), his victory margin among rural white women nearly tripled to 28 points (62 percent to 34 percent ).

In 2020, the support for Donald Trump increased even more. Trump made significant gains, improving on his 2016 record to become the most voted-for Republican presidential candidate in history. Again, rural counties had a big influence on his vote totals.

Read More: If elections are held today in the United States, Trump will beat Biden by a huge margin

Le Pen, like Trump as well as other pro-Brexit politicians, has affluent supporters, as indicated by her first-round election celebration on April 10. Even in 2017, she had backed in rural french population. But, Marine Le Pen’s prospects in little white cottages of rural France are finally swinging wide open.

If county people in France openly indicated that they will vote for Le Pen instead of Macron on April 24th. Then, we will see history repeating itself in France, and that too, within a quick succession of 5 years.