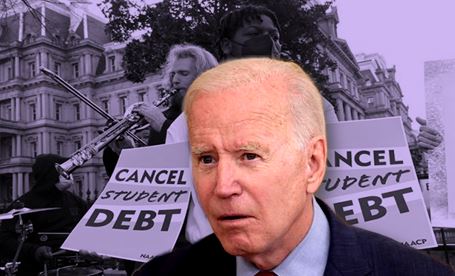 The US is heading towards a new crisis. A new debt crisis is brewing in American colleges. Biden is implementing his poll promise of distributing freebies and forgiving student loans. However, this is bound to make college education expensive and soon it will add more burden on American students, forcing them to take bigger loans and face a bigger debt burden.

During his 2020 election campaign, Biden had promised to forgive up to $10,000 dollars per person in federal student loans. After coming to power, he has canceled loans of around $17 billion.

However, many students in the US feel that Biden’s policies are going to be counter-productive. Mateo Gomez, a Barry University graduate student told Fox News that forgiving student loan debt wasn’t “going to help the actual problem, which [is] the high costs of college.”

Ian Linnabary, an undergraduate student at The University of Utah, holds a similar opinion. He said, “I believe that student loan debt forgiveness is only going to contribute to making college more expensive when the federal government starts pumping money into higher education and financing higher education.”

It is to be noted that expensive education and student loan debt is already a major problem in the US. College tuition fee has increased by around 169% between 1980 and 2019, and presently Americans owe $1.7 trillion in student debt.

Now, if education becomes more expensive due to populist measures, then we will see an entire generation of US students get burdened under even greater debt.

Meanwhile, students who worked part-time to finance their education feel cheated. They worked for several hours on a daily basis in order to get a debt-free education but suddenly it occurs that they along with others who went for student loans are in the same boat.

Nicholas Heil, an undergraduate at Brigham Young University, is one such student. Heil had juggled two jobs last year and worked 60 hours a week in order to grab a study abroad opportunity. He took no student loans and went through his college all by himself. He said that forgiving student loans is unfair to the people that plan and work and save up money” for their higher education.

Gonzalez Garcia, a first-generation student, had taken a big loan to finance her college education. But she too feels that everyone should have to pay for their debt because it is a personal investment.

Read more: Is every American citizen getting a stimulus cheque of $1400? The answer is NO. Debt collectors will claim it

Biden’s policies are creating debt traps for the future. If you can take a student loan and get it exempted, then you don’t really need to finance your education by working part-time. For many hard-working American students, who ensured that they go through a debt-free college education, Biden’s policy of forgiving loans would seem like a betrayal of sorts. And many Nicholas Heils in the future will think that if loans are going to be forgiven anyway, then why should I slog for 8-9 hours a day? And don’t forget, education is only going to become more expensive due to the loans worth billions of Dollars that Biden is forgiving.