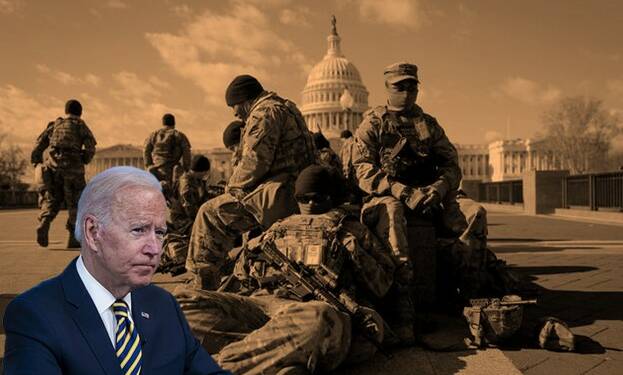 The U.S. military has been taking a severe beating ever since Joe Biden became the President. First, military personnel were given special grants to get their genders surgically changed. Next, the military was forced to turn ‘Woke’. Now, climate change is the real deal, and the Biden administration wants to make the U.S. military ‘eco-friendly’. Joe Biden has announced a “process” is underway to make every vehicle in the country’s military “climate-friendly”, adding that “we’re spending billions of dollars to do it.” Biden made the announcement during an ‘Earth Day celebration.

To quote the man who has evidently lost his mind, Biden said, “I’m going to start the process where every vehicle in the United States military — every vehicle is going to be climate-friendly. Every vehicle. No, I mean it. We’re spending billions of dollars to do it.” This is the first time that such a plan is ever being heard of.

The Pentagon is currently working to develop a “zero emissions” plan for non-tactical fleets, but Joe Biden’s announcement of turning every American military vehicle into a climate-friendly one would have come as a shocker even to the country’s generals.

How will Biden do it?

There is no clarity as to what qualifies as a ‘vehicle’ in the world of Joe Biden. Is Biden referring to land-based vehicles alone? Is he also talking about fighter jets? What about America’s naval assets? Will they be turned ‘electric’ or ‘nuclear’ as well?

I’d say, “Only Joe Biden knows,” but we all know that is not the case. Joe is not in his senses these days. On a daily basis, the President is losing it bit by bit.

Imagine this – Joe Biden wants to convert hundreds of thousands of military vehicles into ‘eco-friendly’ ones. The only way to do so with land-based vehicles is if they are replaced with, or retrofitted with electrical energy consumption mechanisms. Essentially, every military vehicle at the disposal of the United States, and each one being given to it henceforth, will be electrically powered.

Biden Shoots the U.S. Military in the foot

It sounds great, right? America being the only country that has an all-electric military vehicle fleet? Imagine how much gasoline the United States would save!

But here’s the deal. Unless the United States of America wants to be defeated in every upcoming conflict, the country needs to rise as one and reject Biden’s catastrophic plan. The United States’ entire military approach is to prevent physical wars on its soil. That means that the USA has always waged wars, or fought them on foreign lands.

Right now, the focus is on Eastern Europe, the Middle East and North Africa (MENA) and the Indo Pacific. If the United States were to have a cent per cent electric-vehicle fleet in its military, how would the country fight wars?

You see, in case nobody in the Biden administration realises, there are no electric vehicle charging stations located in abundance in areas where the USA could end up fighting wars soon. Imagine the U.S. fighting a war in some African country, only to realise that it cannot charge its military vehicles. Where would that leave American troops? They would be knocked out cold by any Kalashnikov-wielding money.

Read more: In the name of diversity, Joe Biden is turning the US Military into a weakened and a highly compromised unit

Such a scenario has escaped the old and frail mind of Joe Biden. What is scary, however, is the fact that Biden’s team is not telling him what is obvious. He went on to promise the electrification of all military vehicles, without being told that successful completion of such a campaign would leave the American military toothless.