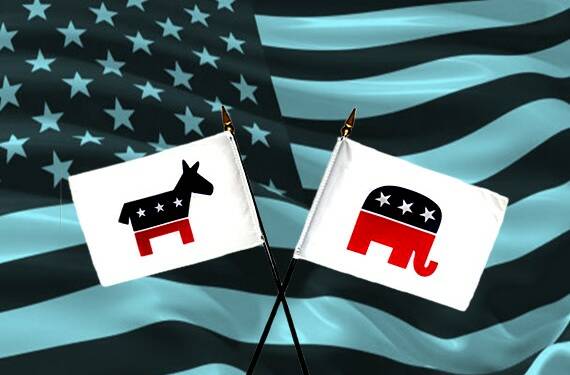 A clear divide is emerging in the United States of America. Historically considered one country, today, if you were to shuttle from a Democratic state to a Republican one, you would feel like you’re travelling to two different countries. The laws are different, the infrastructure is different. In fact, it can be argued that the culture is different in more ways than one as well. In red states, abortion is illegal or frowned upon. In blue ones, it is encouraged. In red states, taxes are low, while in blue ones, they are unsustainably high.

The Blue states and their Democratic leaders have let their virtue signalling and skewed political correctness create a situation where it has become difficult for long-standing law enforcement infrastructure to work effectively. This has led to increased crime rates and these states are bleeding red as the mayors and governors keep bringing mayhem to support their political cause, often ending up on the side of rioters and sometimes even criminals. The continued and ever-increasing trend of shooting and other criminal acts in cities like Chicago, Portland, and Atlanta among others have brought out a trailer of where the cities and states are headed under the Democratic leadership.

California is a Democratic fortress. Today, its characteristics include high business costs, growing living costs, exorbitant and overbearing environmental fees and steep taxes. To add to people’s misery, wokes and far-left extremists have hijacked the state. Californians are forced to study pseudo-science and believe in unscientific nonsense – like claims that there are innumerable genders among humans.

Democrat states have the unique distinction of dilapidating infrastructure, allowing homeless people to set up camps wherever they please, not providing affordable housing to people and also, forcing the critical race theory down their throats.

In New York City, there has been an increase in shoplifting. The New York Police Department said it hasn’t seen numbers like those currently being witnessed since 1995 and organised retail crime is on the rise across the city. According to the New York Times, shoplifting reports have increased by 16 per cent in the last year, but arrests have decreased.

The United States’ capital, Washington DC is among the most solid Democratic state around. However, Washington has today become a den for homeless people. They set up houses wherever they please and the administration is doing nothing to improve their living conditions, leave alone relocating them to specified areas.

Meanwhile, Andrew Cuomo, the former Governor of New York who was once piqued as the upcoming Democratic candidate for President in 2024 had to step down after he was accused by several women of sexual indecencies. One can imagine how a man who sexually harassed women around him would have handled crime against women in New York during his time in office.

America can today be found in red states alone. States governed by Republicans are the only places in America where individual rights and liberties are still being protected. It is no surprise, therefore, that people are abandoning blue states and shifting to red ones.

Interestingly, for inbound movers, the top states were Idaho, Arizona, South Carolina, Tennessee and North Carolina. This establishes the fact that people are leaving blue states and migrating to red ones.

Meanwhile, not only are people getting out of Democratic states but so are businesses. The tech world is now choosing Texas over California. Heavy taxes, high costs of living and anti-investment policies have led to a flight of Silicon Valley companies and tech experts migrating out of California.

Red states are resisting the penetration of Woke culture among their populations. By doing so, Republicans are effectively saving the idea of America and what it means to be American. Republican states are letting people live like they want to. The government does not start jumping around every issue, attempting to regulate people’s personal life.

Instead, red states are focussing on economic growth and development. It must be remembered that after the Covid-19 pandemic subsided, Republican states were the first to open up and get their economic wheels back on track. While Democratic administrations kept shivering with fear, red states fuelled America’s economic recovery – until of course, Biden destroyed the economy on a national scale.

The comparison between blue and red states is one where Republicans always seem to have an advantage. However, it is not like nobody is happy in Democrat ruled states. Far-left radicals, Islamists, illegal immigrants and criminals are all having the time of their lives in blue states. That really tells you all you need to know about the blue states.