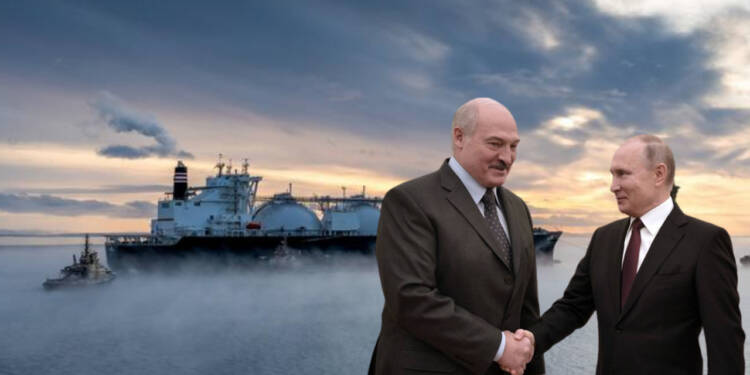 Russia and Europe are not on good terms since the beginning of Russia’s invasion of Ukraine. European nations have been avoiding purchasing Russian oil and are looking for alternatives.

Belarus, an important partner of Russia, has also been sanctioned by the EU due to its overt support to the Russian assault. However, a new media report has revealed that Belarus could be evading these sanctions with the help of Russia.

As per the report, Belarus is exporting its Diesel to the St Petersburg port in Russia from where the Belarusian diesel is being shipped to unknown destinations.

The report doesn’t mention who is supplying the fuel or who are the buyers.

Russia and Belarus are considered staunch allies and both of them have been sanctioned by the European Union and the West. European Union had decided to avoid purchasing oil or refined petroleum from Belarus in the aftermath of civil unrest in the 2021 elections.

Belarus used to export gasoline, fuel oil, and vacuum gas oil before the war, but until April it had not shipped diesel to Russia. Belarus shipped 18,656 tonnes of diesel to St. Petersburg in April, and it further plans to ship 125,000 tonnes in May.

Now, Belarus has started exporting diesel produced at its refineries to Russia’s port of St. Petersburg for the first time, as it seeks new buyers after its usual exports to Ukraine were disrupted.

Read More: Belarus could soon be a part of Russia and there is a whole history behind it

Is Belarusian diesel ending up in Europe?

There are high chances that the buyer of Belarusian diesel is none other than a European country.

Well, the data speaks for itself. Russia earned $66.5 billion from fossil fuel exports since its troops attacked Ukraine in February. Seeing this opportunity, Belarus must also have decided to reap the benefits by resuming its exports through Russia, as it cannot directly sell its oil to the EU and Ukraine due to sanctions.

How Russian Oil is ending up in Europe?

The EU may be boasting that they aren’t buying oil from Russia! But amid this cacophony of anti-Russia voices, the fact is that the oil is still arriving in Europe.

Even after making futile attempts at reducing their oil dependency on Russia, EU nations such as Romania, Estonia, Greece, and Bulgaria have doubled their oil imports from Russia in April, compared to March. Similarly, the Netherlands, the largest buyer of Russian oil in Europe, too has been buying greater quantities of Russian energy.

Russia has been discharging ships of its oil in Europe through sneaky measures such as turning off transponders and disappearing from tracking systems; or by arriving at European ports sailing under non-Russian flags.

Such incidents have risen by 600% ever since the Ukraine war began.

The current crisis in Europe leaves an open field for nations like Belarus to make a profit. Considering Europe’s desperation for energy supplies, it can very well be said that Russia could be supplying Belarusian oil to Europe via its own ports in the same manner it exports its own oil to Europe.

The Russia-Ukraine war: The worst mistake Israel can make