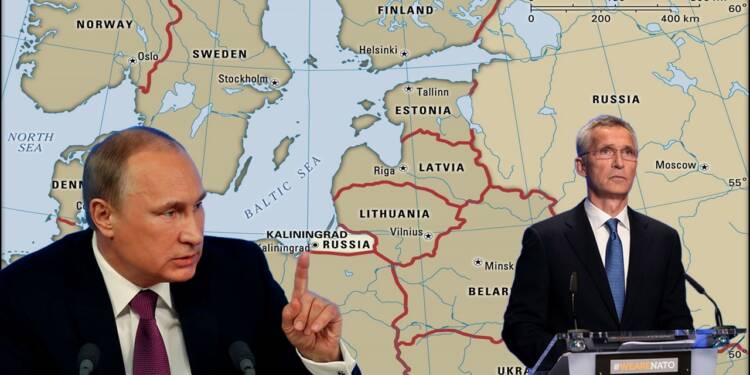 It seems that there is no end to the current problems between NATO and the Western world. First, it got Ukraine invaded with its provocations and now it is compelling Russia into activating the Kaliningrad Oblast module to check NATO’s expansion.

So, what is the Kaliningrad Oblast and how could its activation create more trouble for NATO? Let’s find out.

This will further antagonize the Russian President Vladimir Putin who had earlier invaded Ukraine on being driven by concerns that Kyiv will join the military alliance. While the Western world remains pleased by the decision of two Scandinavian nations to join NATO, the Kaliningrad Oblast could suddenly turn out to be a new frontier right in NATO’s backyard.

Kaliningrad is no ordinary region. The Oblast is located between Lithuania and Poland, effectively isolated with only a railway connecting it to Belarus.

The region is however armed to teeth and is possibly the most militarized region in the world. As per a 2014 Russian Ministry of Defense report, there were over 225,000 military personnel stationed there. That is 35,000 more troops than those used for invading Ukraine.

Russia believes that its troops counterbalance the NATO threat in the region. They also help it advance the interests of Russian and Russian-speaking diasporas in the vicinity. At the outset, Kaliningrad may seem like a vulnerable, isolated exclave for Russia. However, Russia is using it as a military base of sorts.

NATO faces a major challenge from the Kaliningrad Oblast

Russia has several interests and military assets located in the Kaliningrad Oblast. This includes the Baltiysk Naval Base which serves as the home of the Russian Baltic Fleet and the 336th Naval Infantry Brigade. These naval assets can help it blockade the Baltic sea and cut off the Baltic States from NATO. If Finland and Sweden actually join NATO, the geography will therefore become a challenge in the military alliance.

Secondly, the Suwalki Gap, a 40-mile-wide stretch of border between Poland and Lithuania serves as the only land route connecting the NATO countries. Russia and Belarus can however interdict the Suwalki Gap from two sides and crush the NATO.

And finally, the 152nd Guard Missile Brigade is also stationed in Kaliningrad. The Brigade has a dozen two-shot Iskander-M ballistic missile systems and can fire two volleys of 24 hypersonic ballistic missiles, with a range long enough to strike Northern Berlin.

And to protect such crucial assets, Russia has also stationed the 44th Air Defense Division at Kaliningrad Oblast. There is a total of eight battalions of long-range S-300 and S-400 surface-to-air missile batteries for interdicting enemy assaults.

Meanwhile, both Finland and Sweden have made it clear that they will not host NATO nuclear and military infrastructure on their soil.

Read more: Sweden and Finland will never be NATO members

Now, if Sweden and Finland join NATO, it will prove counterproductive for the Western world. Firstly, it activated the Russian module to check NATO expansionism and secondly, Baltic countries literally have no adequate defense forces to take on the Russian military. If they don’t allow hosting foreign weapons, then defending a Russian assault from the Kaliningrad Oblast would practically become impossible.

NATO has therefore invited a major threat for itself with its insistence on getting Finland and Sweden to join the alliance.