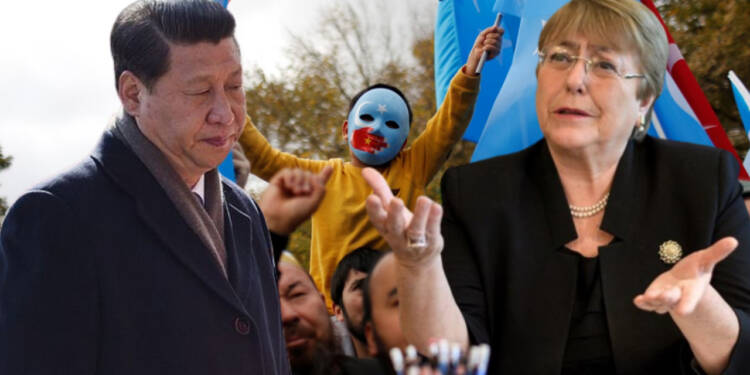 Mischaracterization or spreading misinformation has long been a part of China’s regime. There have been several instances of the Chinese state media dancing to the tunes of the Chinese government, or simply the CCP.

When the world was busy digesting one of the many nonsense claims of CCP, they just could not wait and threw one more.

Recently, there were reports of UN Human Rights Chief Bachelet meeting the Chinese president Xi Jinping. The human rights chief’s remarks surfaced as soon as the video conferencing ended. Soon, the United Nations issued a “clarification” of its HRC chief’s remarks, which is an apparent suggestion that the Chinese state media mischaracterized her comments.

Instantly as the video call ended, the state broadcaster China Central Television issued a readout stating that Bachelet had told Xi that she admired the “efforts and achievement China has made in the areas of poverty elimination, human rights protection.” According to the Chinese media, Bachelet praised Xi’s human rights progress.

“In response to widely reported remarks attributed to High Commissioner Bachelet, please find here a link to her actual opening remarks at her meeting with the President of China,” a spokesperson for the office of Michelle Bachelet said in an emailed statement late Wednesday.

To which the UN retorted and ended the hearsay by terming the stated remarks by Chinese state media as false claims. UN says that she stressed the need to take liberties at the core of security which was in clear contradiction to what the state media reported.

The UN transcript suggested that Bachelet laid emphasis in her opening remarks that must be at the core of “development, peace, and security,” and that China had a crucial role to play within multilateral institutions on issues such as inequality. The whole excerpt contained not a thing that could insinuate that Human Rights Chief praised China for its human rights achievements.

Not just this, but a few months ago Chinese media also got embroiled in fake news claims over Swiss scientists critical of the US. It seems like the Chinese state media likes the sound of spreading fake news. Chinese media gave birth to a Swiss biologist naming him Wilson Edwards, and not they did not stop here but created his Facebook account and posted an article in his name. The post by the Swiss biologist accused the US of politicizing Covid origin investigations. He claimed to have learned or witnessed the US efforts to politicize the World Health Organization’s COVID-19 origin investigations from within. But the irony here is, that the Swiss government confirmed that no such person exists. Hence, the posts have been quietly deleted.

Edwards cited unnamed WHO sources and “fellow researchers” with complaints of having endured “enormous pressure and even intimidation from the US side as well as certain media outlets”.

Also Read: Chinese Media tycoon Jimmy Lai has been sent to 14 months imprisonment as Jinping was scared of the guy

“The WHO sources told me the US is so obsessed with attacking China on the origin-tracing issue that it is reluctant to open its eyes to the data and findings.”

The Facebook post was picked up widely by Chinese state media, including the Global Times, the People’s Daily – which headlined its story as “US attempts to overturn report, leveraging WHO into political tool” – China Daily, and CGTN in multiple languages.

Edward’s growing fame caught the eye of the Swiss embassy, prompting staff to search citizen records and academic publications for any mention of him which led to the exposure of the Chinese state media. On Tuesday, it posted to Twitter: “Looking for Wilson Edwards, alleged [Swiss] biologist, cited in press and social media in China over the last several days. If you exist, we would like to meet you!” it said.

Well, one can never get bored of China’s mischaracterization and spreading of misinformation propaganda stories.