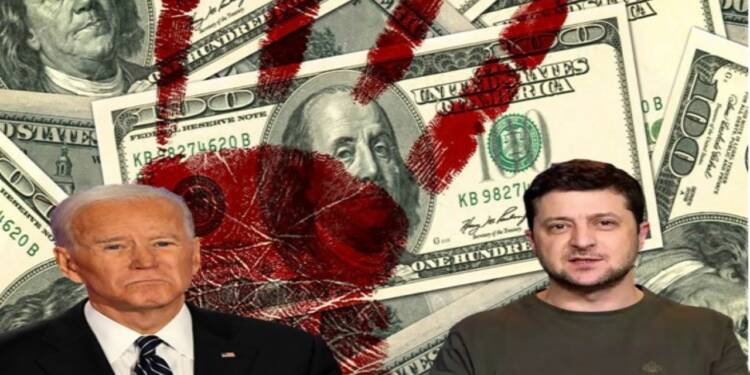 The United States recently awarded Ukraine $40 billion in aid. No one knows where the $ 40 billion will be spent because no one has any relevant information regarding the funds. As a result, it was speculated that US dollars exported to Ukraine would end up in the hands of militants or be laundered for vested interests. Many people also assumed that this money was intended for small restaurants and companies and that it would aid their recovery from the pandemic’s economic impact.

But now we have a new theory, and to be honest, our theory is the most realistic. This funding and aid given to Ukraine end up in the pockets of officials as a bribe, allowing the US to continue destroying Ukrainian land. History and data indicate that this has always been the United States’ approach to a conflicted region.

We all recall how the United States’ war in Afghanistan ended. America had to pull out of the region in a jumbled manner. Surprisingly, Ashraf Ghani’s old regime welcomed the US pullout and pledged to combat the Taliban. Later, the leader and his closest allies flew out of the area.

The opening paragraph of the report explains, “Some senior Afghan officials and their families spent millions purchasing expensive homes in the U.S. and abroad in the final years of the war, which became luxurious landings when they escaped the escalating violence in Afghanistan.” The article then goes on to detail some of those “luxurious landings.”

It seems impossible that all of these officials are honest politicians and bureaucrats who became millionaires by diligently conserving a percentage of their government income in a poor country like Afghanistan.

You see, none of the aid or funds supplied to Afghanistan was ever inspected or monitored. This money was most likely paid to Afghan authorities as bribes to persuade them to support the US exit decision and let the destruction of their country to continue.

The Horrors of Chile

History has it well written how the US intervened in Chile elections.  CIA planned to prevent Salvador Allende from becoming the President of Chile after he received a plurality of votes in the 1970 presidential election. Allende received over one-third of the popular vote. Alessandri also garnered over one-third of the vote, trailing Allende by only one percentage point. A run-off election in the Chilean Congress was scheduled for October 24, 1970. The CIA then decided to secretly bribe the members of the Chilean Congress with U.S.-taxpayer money as a way to induce them to vote against Allende. Though it failed, US’ intention was well exposed to the world.

This makes it more obvious what the US could be doing inside Ukraine. It is heavily boasting money into Zelensky’s and his official’s pockets to convince them in legitimizing its war. The Russia-Ukraine war was never between Ukraine and Russia, it was always between US-led NATO vs. Russia.

Read More: The most corrupt nation in Europe is earning millions every day due to the Ukraine war

You see, the Russo-Ukraine war is US’s last resort for isolating Russia. It’s about Ukraine’s membership in the old, rotten Cold War dinosaur known as NATO. Ukrainian officials are willing to sacrifice thousands of their citizens and the destruction of their country ostensibly while filling their own coffers.