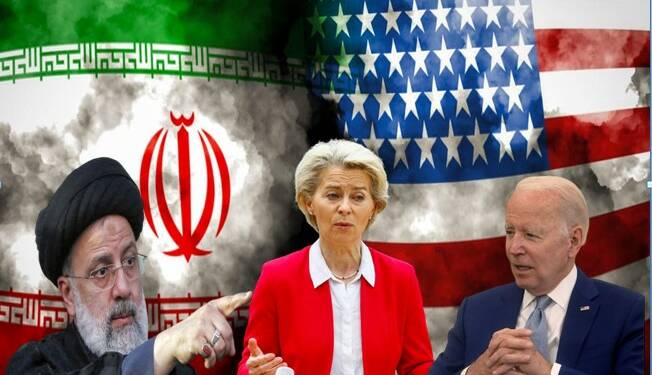 The Iran nuclear agreement, formally known as the Joint Comprehensive Plan of Action (JCPOA), is a landmark accord reached between Iran and several world powers, including the United States, in July 2015. The pact was solely bought to prevent a revival of Iran’s nuclear weapons program and reduce the possibilities of conflict between Iran and its regional rivals, including Israel and Saudi Arabia.

But in 2018, former President of the United States, Donald Trump, reinstated sanctions on Iran and withdrew from the JCPOA deal. The matter stayed in a trash bag for a long haul. However, in 2021, US President Joe Biden voiced his support for returning the United States to the 2015 nuclear deal.

You see, the deal is very crucial on the EU’s part. They are hit with the worst energy crisis possibly in the century and  Tehran can easily fulfil EU’s energy requirements, once and for all. But, the US sanctions on Iran are not letting this happen. So, Europe is actively trying its best to accelerate the negotiations between Iran and USA. But, Tehran is in no mood to revive the deal anytime soon. Besides, Joe Biden’s attempts to return to the arrangement have faced more headwinds than anticipated.

What if we tell you that the Iran nuclear deal can become an immediate reason for the break-up between the US and Europe? Well, it is quite possible.

Indirect negotiations between Iran and the U.S. over Tehran’s tattered nuclear deal with world powers ended on Wednesday in Qatar after failing to make significant progress amid a growing crisis over the Islamic Republic’s atomic program, diplomats said. The Doha talks broke up after two days without any sign of a breakthrough, months after talks in Vienna among all of the deal’s parties went on “pause.”

The chances of restoring the 2015 Iran nuclear deal are even lower after the negotiations, according to top US officials. The Doha discussions appear to have ended negatively, making revival possibilities slim. One US official pointed out that Iran has made so many unreasonable demands to keep the JCPOA alive that doing so is practically difficult.

He said,” Their vague demands, reopening of settled issues, and requests clearly unrelated to the JCPOA all suggest to us, that the real discussion that has to take place is (not) between Iran and the U.S. to resolve remaining differences. It is between Iran and Iran to resolve the fundamental question about whether they are interested in a mutual return to the JCPOA.”

You see, the fundamental bone of dispute between Tehran and Washington is the classification of Iran’s Islamic Revolutionary Guard Corps (IRGC) as a terrorist organisation. Biden made the choice to retain the IRGC on the terrorist watch list in May. This appeased US friends in the Middle East, including Israel, Saudi Arabia, and even the United Arab Emirates, which all demanded a stronger American security presence in the area to defend themselves against Iranian moves.

Domestically rejoining the JCPOA is also more difficult for Iran than most would have you believe. The country’s prominent ultra-conservatives strongly opposed the nuclear deal, which was struck while Hasan Rouhani was president. These conservative voices had expressed their dissatisfaction with trusting the US in the past. While some thought that under Raisi, returning to the JCPOA may be simpler because a deal reached by a conservative president would have greater domestic appeal in Iran, the major debate was about the IRGC’s designation.

This issue is indisputable for Iran. The dispute over the IRGC also reveals how the JCPOA’s basic goals have been watered down; instead of being a system for arms control, it has evolved into a geopolitical conflict including a variety of criteria, problems, and complaints.

Make no mistake, this is a major blow for the European nations as top officials from the European Union have also been making frequent trips between the two sides in an effort to resurrect the Joint Comprehensive Plan of Action (JCPOA) agreement.

“Unfortunately, not yet the progress the EU team as coordinator had hoped for,” European Union mediator Enrique Mora wrote on Twitter. “We will keep working with even greater urgency to bring back on track a key deal for non-proliferation and regional stability.”

Read More: Iranian terrorists will be allowed to visit America under the new JCPOA deal

The concern of European Nations

Well even before the war, the European nations were trying their best to restore the JCPOA negotiations.  But at this juncture, Europe needs the pact to be revived as soon as possible. You see, in order for the European countries to recover from the energy crisis brought on by the Russo-Ukrainian conflict, Iran’s oil fields may prove to be crucial.

Furthermore, many major oil and gas producing countries, including Saudi Arabia, have rejected the idea of increasing output to aid European countries in overcoming the crisis. In light of this, the EU’s justification for considering Iran as a potential partner to create a stable energy market makes sense.

The EU is hellbent to revive the deal, even if it means bowing down to the Iranian demands.  But, the USA on the other hand is not willing to succumb to Tehran’s dictates. This is where discord gets generated between the two factions.

Read More: Iran makes it clear that it doesn’t want the JCPOA, it just wants to use the deal as a bargaining chip against the US

The US and Europe have a mutual interest in one another, as is well documented in history. Over the issue of Iran, their objectives are the same. But the way the two approach the agreement is where they diverge.

Gas shortages are already extremely severe throughout Europe. The JCPOA deal deadlock that has developed between the US and Iran is further hurting European interests. Iran would never permit even a single drop of oil to be exported to Europe as long as the US upholds the original JCPOA requirements. But for the sake of its energy security, Europe may forgo the current talks with the US and reach a brand-new agreement with Iran. Iran might therefore lead to a wedge between the United States and Europe.