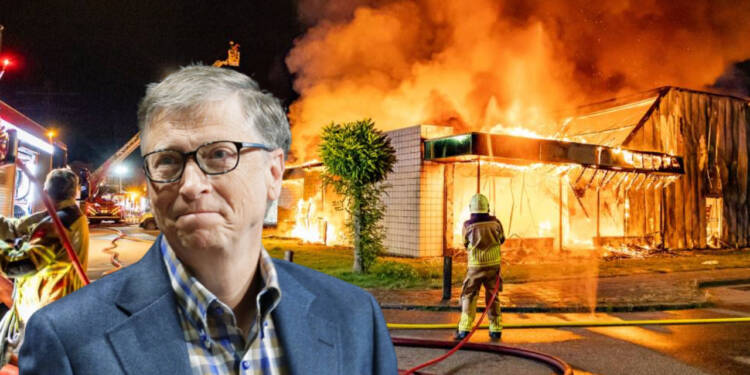 Farmers in the Netherlands have been roaming with a chip on their shoulders ever since the EU proposed the Green deal. The EU has committed to the fulfilment of the overarching objective of the Green Deal of becoming the first climate-neutral continent by 2050. However, this deal is now becoming a conflict of interest for the farmers.

In a recent development, some 40,000 farmers surged into the central Netherlands region with their tractors holding placards and flags to protest against the government’s newly stipulated plan to slash emissions of damaging pollutants.

The ruling coalition wants to cut emissions of pollutants, predominantly nitrogen oxide and ammonia, by 50% nationwide by 2030. Ministers call the proposal an “unavoidable transition” that aims to improve air, land, and water quality.

The MSM doesn't want you to see how big the Dutch Farmers protest is getting. pic.twitter.com/jaWZL4b5TM

Citizens and truckers support Dutch farmers' protest by slowing traffic and blocking roads and highways in many parts of the country. The majority of the Dutch support the farmers' protest. pic.twitter.com/7zeaTz5MwL

This proposal will likely force farmers to cut down their livestock herds and stop working altogether. The Netherlands has one of Europe’s largest livestock industries, with more than 100 million cattle, chickens, and pigs. It is also the EU’s biggest meat exporter.

Read More: Protesting farmers in Netherlands wave German flags—It is the endgame for the EU

And the government is unreservedly adamant about its stance on completely shutting down livestock farming to adhere further to the EU’s green policy.

Even the prominent American business magnate Bill Gates has kept his stance on the issue. He is of the view that rich nations should move to ‘100 per cent synthetic beef’ which will in turn help to combat the fight against climate change by consuming only plant-based products in lieu of beef.

“I do think all rich countries should move to 100% synthetic beef,” Gates said when asked about how countries can help to reduce methane emissions when it comes to food production. “You can get used to the taste difference, and the claim is they’re going to make it taste even better over time.”

The philanthropist is a smart cookie indeed who is busy promoting his own plant-based companies. He believes that a shift to plant-based protein is worth it for some countries. He is also backing ‘Impossible’, ‘Beyond’ and several other companies for his own objective.

Recently, the Gates-funded Picnic facility was burnt to the ground in the dead of the night. It was just last year that the company received a whopping amount of 600 million euros from the Bill and Melinda Gates Foundation. Since Bill is believed to be responsible for pushing additional climate laws his foundational supermarket was burnt down to the ground by a whole raft of protestors. The career-destroying nitrogen policy brought in by the Rutte government experienced flak by the agitators in Holland. The Netherlands delivers a blow to the climate messiah’s maniacal idea which was purely intended to fulfil his selfish interests.

While Government and philanthropist call the proposal an “unavoidable transition” that aims to improve air, land, and water quality, the people of the Netherlands are reluctant to adopt the same. The Netherlands is the largest livestock industry in Europe will face a severe blow for the country if it accepts the government’s proposal will be like turkeys voting for an early Christmas. The ‘climate messiah’ is just driving the Netherlands, especially the farmers, into a crisis in the wake of his personal gains. Bill Gates’ maniacal idea will have grave consequences for the farmers and burning down Bill Gates-backed Picnic facility is no coincidence.

35 Redemption Quotes to redeem yourself in life