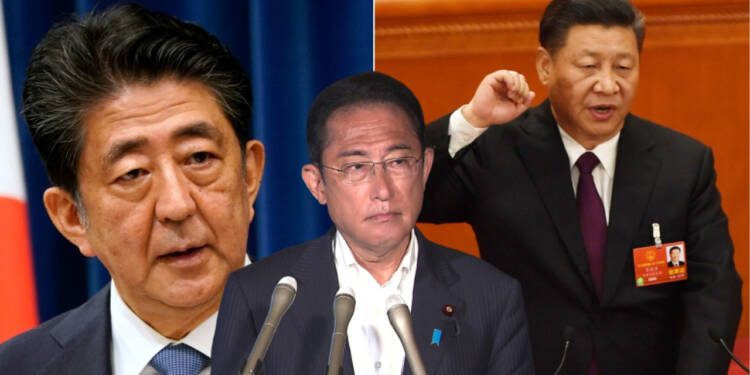 When Fumio was sworn in as the Japanese Prime Minister back in 2021, it was honestly thought that Shinzo Abe’s former foreign minister would uphold Abe’s legacy to the very end. However, the truth has been very disheartening.

Japan’s New Prime Minister Fumio Kishida now seems to be an unworthy successor to the likes of the legendary Former PM Shinzo Abe.

Kishida has ditched the hawkish path followed by Abe and sadly Japan is again heading to become a pacifist nation. Abe spent his eight years in office diluting the restrictive clauses of Article 9 of the constitution, which contains the “No War” clause and arming its defence forces to the teeth. Kishida, on the other hand, has started to go exactly in the opposite direction.

Ever since the former PM Shinzo Abe was assassinated, the much touted “Abenomics” started seeing its end in Japan. Kishida changed the fabric of Japan after coming to power.

China back in Japan


Even when Abe was out of office, Shinzo Abe acted as a formidable barrier to any kind of Chinese encroachment on Japan. The simple fact that the late prime minister was outspoken in his criticism of China and held Taiwan dear to his heart made China and the political elite in Beijing furious over Abe.

Read More: Kishida’s open defiance of “Abenomics” at the behest of invisible players

But just days after Abe’s death, China started making a reappearance in Japan. Many saw a problem in it but Japan’s prime minister Fumio Kishida was least bothered about this fact. At present, the potboiler is regarding foreign companies leaving the lucrative field of Japan. Accusations are ample showing it as a government-initiated move to deliver more benefits to an invincible player and we know who it is. Obviously, China.

Kishida bowing before Chinese belligerence is not new. History is copious with incidents that vindicate the claim. Kishida always argued for a better relationship with China, unlike his predecessor Abe who wanted to refurbish the image of Japan from a pacifist country to an aggressive one.

Recently, Kishida unveiled his ‘New Capitalism’ policy guidelines outlining his economic policy. But this plan had no substantive details or proposed measures to achieve the target. Moreover, there were no signs of specific measures to help startups.

The question of what Prime Minister Fumio Kishida’s language of “new capitalism” implies for governmental policy has been raised by entrepreneurs working to establish startups in Japan, along with economists, market participants, and business executives.

Meanwhile, the startups in Japan are facing a financial crunch amid deteriorating global economic conditions. The startups yearned for reforms and transparency in the tax system and fresh incentives for entrepreneurs. But, the harsh reality is that Kishida ignored the rising startups in Japan.  While the Japanese PM has repeatedly called these startups “the engine of economic growth and innovation”, no steps have ever been taken by his administration to address the myriad issues that Japanese startups face.

Well, now it has been a lot for Japan. Shinzo Abe’s faction in LDP supports Yoshihide Suga and Fumio Kishida last days as the PM of Japan is here.

Therefore, Japan is now finally getting rid of the Chinese dove PM. Japan is all set to kiss Fumio Kishida goodbye. And, guess who will take over the office? Former Prime Minister Yoshihide Suga. Certainly, a breath of fresh air for the Japanese people. Former PM Suga of the Liberal Democratic Party, who has been anti-Kishida administration, will be reinstated.

Suga has served as the Chief Cabinet Secretary in the second Abe administration for 7 years and 8 months during which he inherited Mr. Abe’s line during his prime ministerial era.

Read More: Kishida is about to lose his chair, and we think Abe is behind it

This must be music to the ears of the people of Japan as they will finally get rid of the China dovish PM Kishida. Since coming to power, Kishida has blundered Japan as a whole and the people of the country discontent. Anyway, the Chinese pug is losing his chair now which will prove to be a sigh of relief for the country.

19 Quotes About Being There For Someone