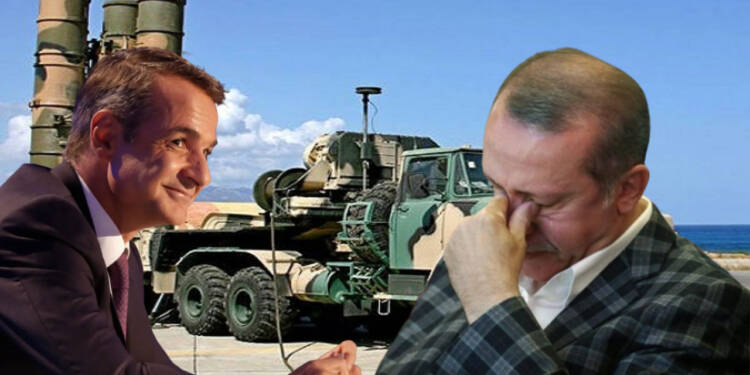 Since the 1970s, NATO members Turkey and Greece have had no love lost with each other. The nations have been at odds over the size of their respective territorial waters in the Aegean for a very long time.

The tensions between Greece and Turkey have been at their pinnacle. However, something spectacular happened last Saturday.

There was total pandemonium in Ankara as Athens was ready for full-blown combat. However, the EU had nothing to do with all this, it was someone else behind the recent standoff.

Last Saturday, Turkey’s state-run press reported that the tracking radar of Greek missile systems in Crete locked onto Turkish F-16 fighter jets, which were flying at an altitude of 10,000 feet west of the Greek islands of Rhodes.

As per Turkey, Turkish F-16s were undergoing a reconnaissance mission in international airspace, and Greece purposely locked in its missiles to scare off Turkish fighter jets. Furthermore, Turkey claimed that four Greek fighters also tried chasing the Turkish jets. But, as per Turkey, ‘they failed’.

Turkey flatters that its planes completed their mission and returned to their bases “despite the hostile environment”. However, if Turkish claims are examined properly, you’ll conclude that Turkey was actually scared off by Greece’s tactics.

For the last few months, Turkey has been intruding into Greece’s airspace. It was being warned by Greece to back off, but it was not willing to return.

On 27th August, Turkish planes once again intruded into Athen’s airspace. Ankara, however, was unaware of what was in store for them.

Greece was armed to teeth with Russia’s S-300 defense missile system. Yes, you heard (read) it right! It was the radars of the S-300 system on Crete island that locked onto Turkish F-16 fighter jets flying at an altitude of 10,000 feet.

These S-300 missile defense systems were originally ordered by the Republic of Cyprus back in the mid-1990s. However, the system was ultimately diverted to Greece after Turkey threatened to preemptively destroy them.

Greece had never used this missile system since 2013. It had simply kept them in its arsenal. If the Greek S-300 radar did in fact lock on to Turkish F-16s, this means Athens is thinking about bringing them into active military service.

If that happens, it would be a major development and a clarion call that Greece is ready to take on Turkey. The country, which has been resisting Ankara for years, is suddenly prepared to fight tooth and nail. That’s some quick bravery there. But how?

Well, given that Greece and Russia currently recognize Turkey as one of its major thorns, it is quite likely that the deployment of the S-300 was done in accordance with Russia. Let us explain why.

Read More: US wants to throw Turkey out of NATO but Greece needs to be sacrificed

Turkey is an opportunist nation. The nation has always tried to walk on a fine line between NATO and Russia. But, recently, it did something to trigger Russia. Recep Tayyip Erdogan, the president of Turkey, vehemently endorsed Ukraine’s claim to Crimea and condemned Russia’s incursion as unlawful.

Furthermore, Ankara attempted to heckle Moscow by refusing to acknowledge Donetsk and Luhansk as separate regions. Considering Turkey’s cunning and vile behavior around the world, this was sufficient to trigger nations like Russia.

And when it comes to Greece and Cyprus, Turkey is one of their staunchest enemies. Both nations have long accused Turkey of undermining their territorial and maritime sovereignty in the Aegean Sea region.

However, both were unable to drag out Turkey on their own due to a lack of support from the West, which left the countries in dog’s life.

However, the waters in Aegean are hot again due to the sudden deployment of the S-300 system, which undoubtedly is a major shift in position against Turkey. Greece and Cyprus have finally jumped on the bandwagon.

Erdogan’s recent adventures have indeed put Turkey on a suicidal trail. Greece and Cyprus have given a clarion call to Turkey that they won’t hesitate to ally with Russia and attack Turkey if a conflict breaks out.

We at TFI had already predicted that if military confrontation breaks out between Turkey and Russia, Greece and Cyprus are also expected to join the fray.

And this is exactly what’s happening.

‘Be with us, or you won’t exist on world map,’ Putin’s final offer to Erdogan