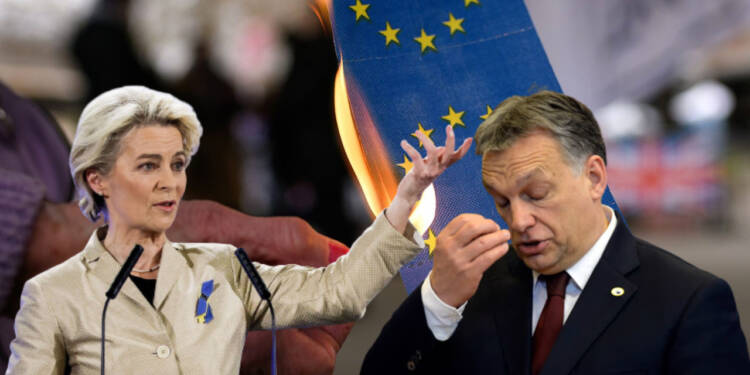 When it comes to building castles in the sky, no one can beat EU’s dictator Ursula von der Leyen. There is no dearth of tales about her corruption, her bootlicking China, and her dalliance with fellow liberal scums across the Atlantic. She has successfully managed to push the entire continent on the verge of a civil war! And still, nobody is questioning her leadership capabilities. Frankly speaking, she is the one who should be immediately removed from her office.

Dictator Ursula goes all out against Hungary

But look, this heinous dictator has the audacity to call out the so-called backsliding of democracy in Hungary. Members of EU Parliament on Thursday declared that Hungary is no longer a democratic country. The members said, “the country should be considered a hybrid regime of electoral autocracy in which elections are regularly held but without respecting basic democratic norms.”

The MEPs also condemned Viktor Orban’s government’s “deliberate and systematic efforts” to undermine the EU’s core values. This is believed to be the first time that an EU institution has declared a member state “not a proper democracy”, an essential prerequisite for joining the bloc. This means that dictator Ursula can soon begin preparations to kick Hungary out of the outdated EU bloc.

If that doesn’t happen, dictator Ursula and her lackeys will now try to delegitimize Viktor Orban’s presidency. That’s exactly what we are witnessing today. Orban is truly a people’s leader in his country. His ‘Fidesz party’ won 135 seats out of 199. The popular vote margin was 53.7% for Fidesz to 34.4% for the ‘United for Hungary’ opposition grouping. And yet, EU believes Orban to be an illegitimate leader. How convenient, isn’t it?

In fact, Orban is the most competent leader in the European Union. His good relations with Putin have ensured energy supply lines stay up and running throughout the Ukraine crisis. As a result, Hungary’s energy reserves are full up to the brim. There are no signs of civil unrest in the country as we are witnessing in Germany, Italy and the Czech Republic. People have easy access to cheap food and basic necessities like warm water and electricity.

Read More: Ursula von der Leyen—The woman responsible for many, if not all, problems in Europe

What Hungary lacks is blind hatred for Russia and its President Vladimir Putin. And that is what makes Orban an authoritative leader in EU’s eyes.

Now, EU is striving to legitimize opposition leader Peter Marki-Zay, at the expense of Hungarian democratic values. Marki-Zay is backed by EU and is a staunch anti-Putin politician. He’s a perfect match for EU. Hungarians, though, don’t like him.

Democracy stands tall in EU’s way to Budapest. So, efforts are underway to murder Hungary’s democracy and set a coup d’etat in motion to unseat Orban.

The European Commission has already launched a rule-of-law disciplinary procedure against Hungary. The untested mechanism, designed to prevent EU funds from being misused by countries’ backsliding on the rule of law, was agreed upon by all 27 EU leaders in late 2020 and could ultimately deprive Budapest of more than €40bn of EU payments. The EU has also withheld the payment of €7.2bn that Hungary is eligible to claim under the bloc’s Recovery and Resilience Facility (RRF). Without these funds, Hungary’s budgetary deficit could swell to 10% of the GDP.

EU is now resorting to arm-twisting Hungary economically! Brussels hopes this will help the bloc shore up Marki-Zay’s approval ratings. But Alas! The Hungarians won’t have any of it. Ursula’s inflated ambitions are all set to hit the democratic wall of Hungary.