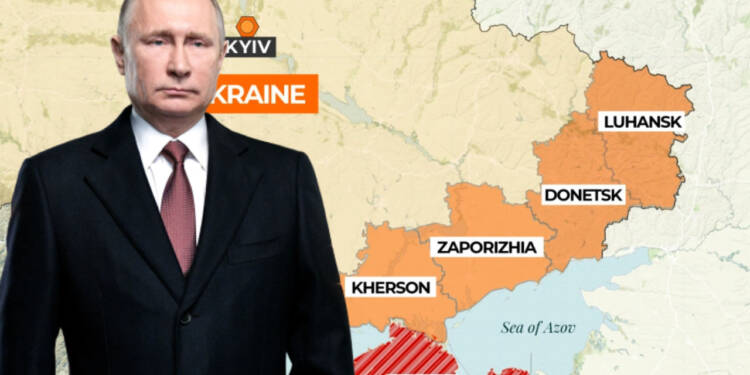 The war in Ukraine is approaching its end with Russia getting closer and closer to its agenda. You see, the Russians recently retreated from some positions in Ukraine that seemed to have overjoyed the west and the Zelensky regime.

However, the move was purely strategic and was in accordance with the aims set up by the Kremlin’s high command in the very beginning. Moscow never wanted to annex the whole of Ukraine, all it wanted to do was to protect its borders from foreign aggression by halting Ukraine’s possible accession into NATO and liberating the ethnic Russian populace areas from Ukrainian control.

The mandate is finally out

According to recent statements, Russian-installed officials in Ukraine’s occupied regions would ask the Russian leadership to annex the respective regions into Russia. The announcement was made a day after the populace of the regions in question declared their intent to join Russia through a referendum.

Officials in Kherson intend to make the request in the coming days, unlike Luhansk and Zaporizhzhia, which will do so this week. Separatist leaders in the Donetsk region are anticipated to act similarly.

Authorities in Luhansk reported that 98.4% of voters there chose to join Russia. An official in Zaporizhzhya estimated the percentage to be 93.1%. The chairman of the voting committee in Kherson estimated the vote there to be around the 87% mark.

Denis Pushilin, head of the self-proclaimed Donetsk People’s Republic that reported 99.2 % of participants in the region had voted to join Russia.

All in all, an average of 94% of people have voted in favour of joining Russia. You see, most of these areas host an ethnic Russian populace who reportedly were subject to discrimination and segregation by the Ukrainian authorities.

The official end of the war?

It would not be right to declare the event as the end of the war. Russia seems to have ended its aggression and is only holding forces in occupied territories to ensure peaceful annexation.

Russia could declare the annexation of 15 % of Ukraine on Friday as Moscow-backed “referendums” end, according to British officials.

Although the west and the Zelensky regime label the referendum as a sham, their opinion, in reality, holds no value as Russia is the one that now safeguards the integrity of the occupied region and is responsible for the safety of its people.

Read More: Ukraine is opposing plebiscite in Donbas because it will expose his Neo-Nazi connections

Escalation by Ukraine into the occupied territories could force Russia to mobilize its professional army back in Ukraine. But if the Ukrainians are not mad enough to provoke Putin, it could indeed mark the end of the war.

The occupied regions in question would soon become a part of a united Russia similar to how Crimea became in 2014. However, the timing of the process still seems unsure.

In 2014, Putin signed a bill recognising Crimea as part of Russia two days after the Moscow-organized “referendum” and before a vote by parliament.

It looks like Moscow would soon bring about the bill and work on solidifying the defences of the areas before the upcoming winter. The area becomes more important as it now gives the Russians better control over the Sea of Azov.