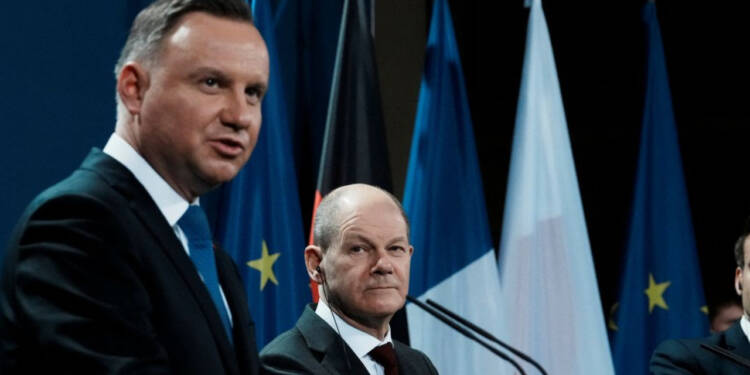 Greece is eyeing compensation of around 500 billion Euros from Germany: From the 1930s until the 1950s, the world recognized Germany’s military prowess. However, this might was recognized by the world after German troops dumped a kill count on the continent. The madman who once ruled Germany has been gone for almost 70 years, but, the scars of that haunting period still continues to scare Poland and other nations.

Over the last 70 years, Germany enjoyed leverage over other European nations both economically and militarily. But now, time’s changing. Karma never loses an address. This is a fact and Germany is the recent example to prove so. As a repercussion of the Ukraine war, Germany is on the verge of losing both of its tags and this has empowered smaller bullied EU nations to heckle Berlin like there’s no tomorrow. Just a few days ago, Poland decided to rock the boat for Germany as it decided to demand WW2 reparations from Berlin.

The demand was raised following the publication of the long-awaited report, which estimated Poland’s cost of devastation during World War 2. Although, Even though Germany denied paying such a large sum, Warsaw’s conduct may have encouraged other countries to do the same. Greece is now joining the clan. Yes, Athens is also enraged toward Germany for its past horrific acts.

While announcing its intention to re-push the demand for reparations, Nikos said:  “For the Greek Government and the Greek society this issue (reparations from Germany) remains open; and its resolution, which is primarily a matter of principle, I think will be beneficial for all the countries involved and the EU as such,”

Greece is eyeing compensation of around 500 billion Euros from Germany. Out of this, 309.5 billion euros ($306 billion) in war damages from World War II. Whereas, 2 billion euros for WW1 destruction.

Greece also claims that more than 107.2 billion euros in damages for the dead and injuries should be paid out.

Read More:  Poland has lost hundreds of tanks without firing a single shot

After invading Greece on April 6, 1941, German armed forces went on to carry out numerous massacres in the country, with tens of thousands of civilians dying during the conflict.

This is one of the primal reasons why like Poland, Greece also demands WW2 reparations on several occasions.

Germany considers that the issue has been resolved by the so-called Two Plus Four Agreement, signed in 1990, which allowed united Germany to become fully sovereign the following year. However, Greece is not ready to accept the deal.

Under the former left-leaning Prime Minister Alexis Tsipras, Greece tried locking horns with Germany over the issue on numerous occasions.

In 2019, Greece summoned German officials to talk over the issue. However, Germany never took the request seriously.

Greece last requested talks but since then, the current prime minister Kyriakos Mitsotakis hasn’t put any pressure on Berlin.

Although now, it looks like Greece is preparing again to give a major blow to Berlin. Germany may claim that issue of reparations is all but water under the bridge. But here, Greece actually has a legal right. A Bundestag report in 2019 found that Greece’s claims did have legal weight.

Furthermore, history has it written that Germany has been obligated to pay reparations after the War. The Potsdam conference held between July 17 and August 2, 1945, obliged Germany to pay the Allies US$23 billion mainly for machinery and manufacturing plants. Additionally, Berlin was compelled to pay for other material losses.

Read More: Greece goes Putin Putin, and pro-Russia party is all set to take over Athens

So now, a crisis-ridden economy, namely Germany, is now finding itself in a difficult situation. Poland already emphasized the need for 1.3 trillion dollars, whatever it takes. Now, Greece is waiting in line with a demand for 500 billion dollars from Germany.

Germany already has a few viable options. It must either resolve the issue itself or take it to the EU Court of Justice in Luxembourg. Which route would Germany choose?? Let’s wait and watch.