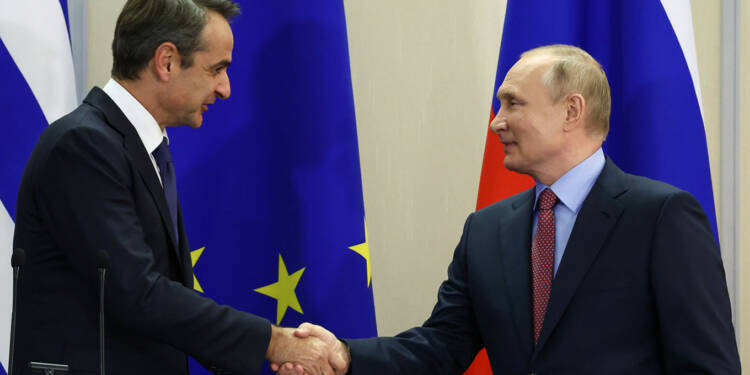 Kyriakos Mitsotakis is one of Europe’s most unpopular leaders. In his tenure, Athens has just added insult to Greece’s injury. The economy is in complete tatters, Turkey is heckling Greece like there is no tomorrow, whereas, Mitsotakis himself is drowning in a pool of scandals. If elections are to be held today, he will lose all his ground. However, time puts everything in place. Greece’s ruling party is now officially trying to call the shots and leave their liberal disguise.

According to a news report by Euractiv, Greece’s ruling New Democracy party is looking for an alliance with the “Greek Solution”, a greek party known for its pro-Russian stance.

Reportedly, Greek Minister of Domestic Affairs Makis Voridis has confirmed that New Democracy might walk into elections with a Greek solution. The minister stated, “We don’t exclude anyone. Besides the parties whose programs are completely different than ours, we can work with all parties”.

The next general elections are scheduled for 2023, however, demand is growing to call early elections in the wake of Mitsotakis’ decaying popularity. The “Watergate” controversy, involving the secret services of Greece monitoring opposition politicians and journalists, has pushed New Democracy into a difficult position.

Given the fact that Mitsotakis’ popularity has fallen, political analysts are predicting that a coalition government will be required in order to form a majority administration in 2023. Mitsotakis, himself though, is no great fan of Greek solutions. He has constantly turned down talks of any collaboration with the Greek Solution. But it seems that his party is testing the waters.

Clearly, Mitsotakis and his Party leaders appear to have a conflict of interest here. However, it doesn’t matter for New Democracy at this point because Mitsotakis is losing credibility.

Now, when we talk of the Greek Solution, their stance on Russia could be a page-turner for Greece. Greek solution is a party that has not hidden its pro-Russian feelings. Its leader, Kyriakos Velopoulos, has openly criticized the EU’s decision to send weapons to Ukraine, saying that Greece “needs its last bullet”.

At the inception of the Ukraine war, he told the Greek parliament: “In a war, you are with the defender. You are with the victim, with the crying children… Ukraine is not our friendly country, as Kyiv tweeted in favor of Turkish drones and Turkish friendship.”

He has even backed Russia as the Ukraine war dragged on. Velopoulos stated: “Yes, Putin made Russia. It is a truth. Is he authoritarian, or his country, he is a leader. We admired what he did [to create Russia]; we do not admire and condemn what he is doing now [with Ukraine]”.

Read More: Greece and Russia are just one step away from snatching the Turkish straits

Alarm for Turkey and NATO

If New Democracy links its ties with the Greek Solution, the whole political scenario of Greece will change. The new government of Greece would be making a complete U-turn of all its actions in Ukraine. Mitsotakis as prime minister has always styled himself as a moderate and pro-U.S. politician. However, his recent acts suggest that staunch conservatism is not far from the Hellenic Parliament.

Along with that, Athens is already leaving no stone unturned to thwart Turkey. Just a few days ago, Greece was armed to teeth with Russia’s S-300 defence system to take down Turkish Jets wandering in Greece’s airspace.

Whereas, just a week ago, Greece officially warned NATO to take care of Turkey or else the government won’t hesitate to answer Turkey’s unprovoked, unacceptable insult to Greece and the Greek people.

Read More: Erdogan loses his war against Greece even before the war actually started

A pro-Russia party is all set to take over Athens, though, there is still time.  Consequently, New Democracy is mulling over a coalition with the Greek Solution. This coalition would mark yet another staunch hardliner of the West marching towards power. NATO, the EU, and Turkey would thus be forced to make a Hobson’s choice over whether to ignore Greece or lock horns with it just like Budapest or Rome.