Unprovoked aggression and fake news: How Biden and Zelensky are prolonging a war that Russia clearly doesn’t want 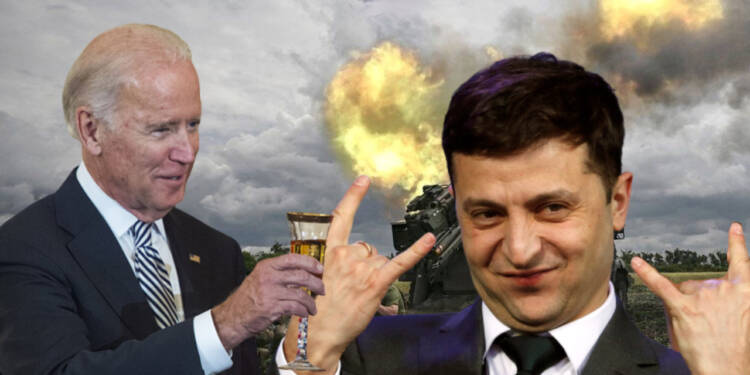 As if the mystery sabotage of Nord Stream wasn’t enough, the West has made another dangerous move. According to media reports, Russia is given a new blow by a recent attack on Crimea. Reportedly, the Key bridge (Crimean bridge) linking Crimea to Russia is hit by a massive explosion. Images from the Crimean bridge show at least two freight trains are completely consumed by a fiercely blazing fire, which was accompanied by a massive column of black smoke.

One of sections of the Crimean Bridge collapses into the sea. This is section from Russian Taman to Ukrainian Crimea. pic.twitter.com/LEv62wctsV

Furthermore, one side of the parallel road bridge has also collapsed into the Kerch Strait. The attack was carried out by an automobile-driving suicide bomber. It occurred on Saturday just before 6 a.m. Obviously, it remains a mystery who carried out the attack. But, Ukraine is somehow confirming that the fall of the Crimean bridge is the west’s recent nefarious attempt.

Mykhailo Podolyak, an adviser to Ukrainian President Zelensky, hailed the damage as a “beginning” but fell short to attribute the attack as a Ukrainian attempt. He tweeted, “Everything illegal must be destroyed, everything stolen must be returned to Ukraine, everything occupied by Russia must be expelled,”

Make no mistake, any assault on Crimea, where there is a sizable Russian force present, is undoubtedly an attempt to weaken Russia in midst of the ongoing war.

In 2018, Russian President Putin inaugurated the Crimean bridge as a sign of Crimea belonged to Russia. The Crimean bridge has been utilised by Russia to transfer personnel and, military equipment to battlegrounds in Eastern Ukraine. The bridge had always been in the crosshairs of the West. In light of their commitment to retaking the peninsula, Ukrainian authorities have continuously claimed that the bridge is eventually a target.

Read More: Zelensky and Biden were hoping for a coup in Russia, but Putin had other plans in mind

Fake news factory of the USA

If Zelensky is doing everything in his power to agitate Russia, then his Uncle Joe is also not falling behind. Biden has also been working over the past few days to ensure that a conflict that could be resolved with a few peace negotiations somehow continues.

As rumours of Russia testing its nuclear capabilities surfaced a few days ago, US President Joe Biden declared on public television that Russia is now preparing for an age of “armaggedon“. Biden even compared Putin’s recent threats to use a nuclear weapon to the 1962 Cuban Missile Crisis. This is unquestionably a perfect example of scare-mongering.

However, these claims of Biden were debunked by Pentagon officials. Pentagon claimed that it still has seen no indications that Vladimir Putin is planning to launch nuclear weapons. Biden had even asserted that Putin was using chemical weapons in eastern Ukraine a few months ago. Undoubtedly, he was engaging in similar fearmongering. However, no formal evidence has yet been discovered.

You see, this is notably a vast network of deranged tactics being used to irritate Russia and prolong the conflict. For the West, the victory is only that Putin dies from any sort of disease or Russia accepts defeat, nothing less than that is acceptable for them.

Why there can’t be peace?

But, one needs to ask a question, why couldn’t there be peace in Eastern Ukraine? It’s not like Russia and Ukraine never tried to reach a settlement to the conflict in Donbas. France, Germany, Ukraine, and Russia have gathered to talk about the unrest in Eastern Ukraine under the tenure of former President Donald Trump.

Biden, on the other hand, has never believed that to be the case; for him, war has always been the answer, and why not, how would you benefit the American military-industrial complex? To this date, Russia is ready to have peace talks with Ukraine. During the recent SCO summit, Russia openly acknowledged that it wants to end the war and is ready for peace talks. But, Zelensky has constantly thrashed these offers.

The sole objective of Uncle Sam and his poodle Volodymyr Zelensky is to defeat Russia at all costs. They don’t want the war to end because Zelensky and NATO would suffer great humiliation. At this point in time, Biden could lay a heap of dead bodies and continue to act like it doesn’t matter.

Ugandan President faces an imminent coup from his own son

$240 billion: The cost of abandoning Russia for global corporations