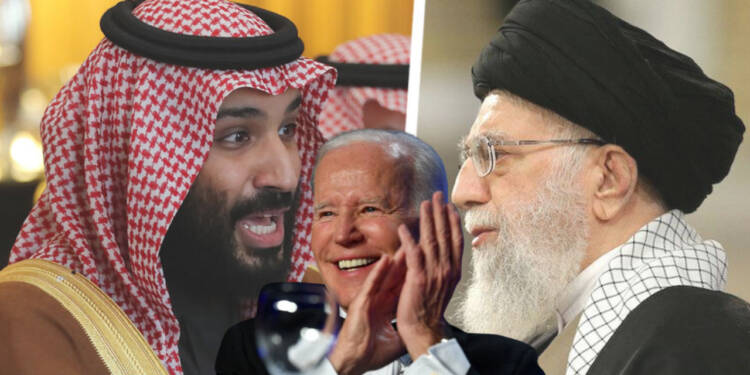 On 14 November, Iran called on Saudi Arabia to change its “unfriendly” behavior after accusing Riyadh of encouraging anti-government protests since the death of Mahsa Amini, according to Middle East Monitor.

“We do not seek to increase tension in the region, and we are committed to the path of negotiations with Saudi Arabia and the understandings reached,” Iranian Foreign Ministry Spokesman Nasser Kanaani said during a press briefing.

With this, Iran again locked horns with Saudi Arabia over a long contentious fight over religious differences. The majority of Muslims in Iran are Shia, while Saudi Arabia is a pre-dominantly Sunni Muslim nation. Everyone around the globe was astonished by this sudden criticism of Iran. There was no clear idea about why Iran suddenly rebuked Saudi Arabia. But now, it’s pretty clear.

UAE and Saudi behind Iran protest

As Iran continues to remain in political unrest, the media has already blamed Saudi Arabia and UAE for the mishap in Iran. According to a media report by Lebanon newspaper Al Akhbar, several US documents have revealed that Saudi Arabia and the United Arab Emirates had hatched a covert plot to “destroy Iran from within,” primarily by inciting hostility among Iranian youths.

According to the revelations, a Saudi-Emirati “think tank” established in 2016 was responsible for developing the plot. The establishment of the Persian-language Iran International news network was listed as the think tank’s flagship project in the documents.

Events over the past 15 years have exacerbated the differences between Saudi Arabia and Iran. If one recalls, political unrest brought on by the Arab uprisings in 2011 was used to expand their influence, especially in Syria, Bahrain, and Yemen. Iran’s critics assert that the country wants to establish itself or its proxies thereby seizing control of a land corridor connecting Iran to the Mediterranean.

However, after the relations between Iran and USA worsened especially after the cancellation of the JCPOA deal under Donald Trump, Saudi Arabia, and Iran started to soften their tones. In a 2021 interview, Saudi Arabia’s de-facto leader MBS stressed that he aspires to have a “good and special relationship” with Iran. There were also discussions that the nations might reach a common consensus very soon.

Iran was very soon intending to reopen its embassy in Saudi Arabia amid Iraqi mediation between the two regional arch-rivals. However, things are now back to square one.

Now, the relations between Iran and Saudi Arabia have worsened again. One needs to understand who will benefit the most from the conflict between the two nations. The answer is pretty obvious, the United States of America.

Read More: Biden’s Iran policy has been the most confusing till date and now it has become laughable

USA behind the drama?

The report stresses that, a think tank that tried successfully involved the United States in its anti-Iranian campaign by running its agenda with Washington on the sidelines of the G20 summit in Argentina in November 2018.

The proposal was pushed forward by the American side following former US president Donald Trump’s withdrawal from a nuclear deal between Iran and other countries, upon which Trump returned all the sanctions that the accord had lifted. Back then, the Saudi delegation to the summit proposed that the plot start assuming a number of additional “practical steps.”, this is all quoted within allegedly released documents by the USA. But, as expected, there are no substantial proofs within the report.

The US defense industry complex has benefited the most from conflicts within the middle east. The US has always attempted to sell weapons by inciting tensions within the nations and it is no hidden fact. A few days ago, the US reminded Saudi Arabia that it would support the country without conditions in event that Iran launched an attack, despite Saudi Arabia’s denials that it had provided any intelligence to the US.

Now, the US has released a purported “document” that emphasizes that Saudi Arabia and the UAE are to blame for Iran’s protests.

In addition, the US for a long haul has attempted to lock horns with Iran because of failure in setting up a new JCPOA deal. A few days ago, the US fleet had surfaced in the Arabian sea near Iran, the submarine was loaded with missiles. This makes it more ardent that the USA might be attempting to compel Iran and Saudi Arabia to cross swords.