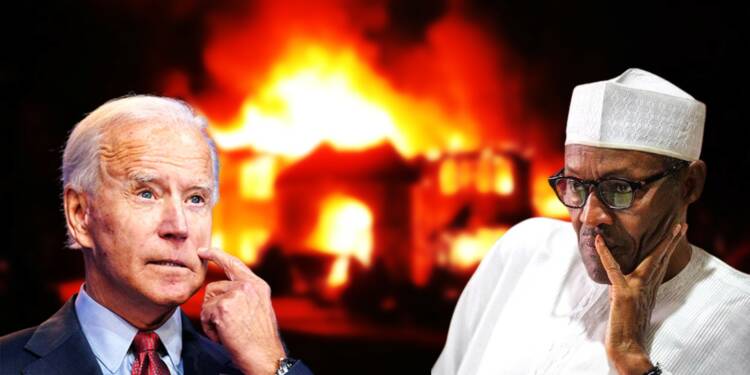 Nigerian Electoral Commission: The importance of Nigeria to the global economy remains undisputed. Nigeria has a commanding clout that no other country on the continent can match because it is one of the biggest countries in Africa and one of the biggest oil producers in the world.

2023 is going to be a red-letter day for Nigeria. Africa’s largest and strongest economy is going to hold a general election next year and thus, the campaign mode is in full swing as of now.

However, the vultures of the west are also waiting for the apt moment to stir tensions and grab control of the region. Almost a month ago, the USA had somehow indicated that it is coming for Nigeria, and guess they have already started meddling. Instability and uncertainty, the two tools which the west has constantly used to lay siege on Africa are now pushed in Nigeria.

Less than 100 days are left for General elections in Nigeria. However, things have already started to get out of hand. According to Africanews, The Nigerian Electoral Commission (INEC) has claimed that one of its offices was burnt down in the southeastern state of Ebonyi.

The attack by “unidentified” men did not result in any casualties. But here things get a little fishy. All the records and important materials related to upcoming elections were destroyed, including Voter ID cards.

The Nigerian Electoral Commission has furthermore added, “This is the third such incident in November, after the attack on two INEC offices in the southwest, a region usually spared from such violence.”

Because the area has usually remained violence-free, the Nigerian Electoral Commission has often kept their election-related records in these offices. But this is for the first time that the state of Ebonyi has seen such violence.

Make no mistake, in just one month, the country’s stability had already begun to wane. Some politicians, according to Independent National Electoral Commission (INEC) chairman Mahmood Yakubu, are actively encouraging violence.

Since the election campaign got underway a month ago, the INEC has so far recorded 51 politically motivated attacks in 21 states of the federation. One of the primary targets is its own offices.

All of this occurred in a single month. So, the nation is currently dealing with two major problems: Islamists, and attacks with political motivation. which are hindering the expansion of the biggest economy in Africa.

Read More: Facebook has an Islamist problem, and it just showed its ugly head in Nigeria

Elections in the most populous country in Africa are frequently tainted by rhetoric based on race and religion, reflecting many fault lines. Violence and fraud have marred previous elections in Nigeria.

But in 2023, when Al-Buhari is not seeking re-election, the electorate will choose a replacement, and hence, the situation is drastically different.

The man who single-handedly made Nigeria an economic juggernaut is leaving, so the West has already begun to intervene in the region without any delays.

Read More: IMF dogs growl at Nigeria as it starts freeing its economy from America’s clutches

Is this West’s attempt?

Exactly a month ago, a chain of events occurred in Nigeria. Firstly, US Secretary Antony Blinken unleashed a charm offensive on Nigeria by releasing a press statement. In the statement, he stated, “We stand with Nigeria as a democratic partner in supporting free and fair elections and value leadership of Nigeria on global and regional issues including the fight to end the COVID-19 pandemic.” (sic)

A few days later, The World Bank announced a $750 million credit line (financial aid) to Nigeria for helping 36 states in Nigeria to push through reforms to attract investment and create jobs.

And so, the violence saga has started to engulf Nigeria. This was expected and of course, what you expect from the USA which has always wanted Africa to remain in its clutches.

Authorities in Nigeria also found a theft pipeline that had been operational for approximately 8 to 9 years. Nigeria had also rejected a request from the US company Tesla for lithium for batteries.
Read More: Blinken openly suggests that he’ll install a puppet President in Nigeria

With Buhari out of power, 23 candidates are up for the race in Nigeria. And the US is already keen to install a puppet president in Abuja.  This is due to Nigeria’s substantial wealth, which it has used to grow into an economic powerhouse.

There are many unanswered questions surrounding this enigmatic fire at the Nigerian Office of the Electoral Commission. But the West may surface as the orchestrator.