The Jamaican leader was on a 5-day tour to the USA and was poised to meet the State Department officials to discuss enhanced security cooperation with the US. However, he didn’t reprimand Biden as he did a few days ago 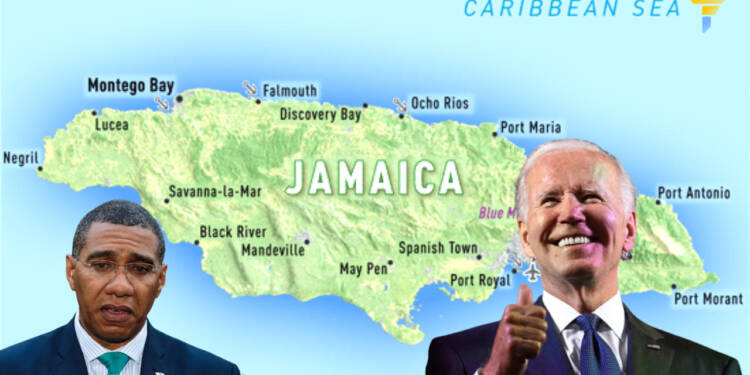 Andrew Holness US visit: According to a media report by Jamaica Observer, Jamaican Prime Minister Andrew Holness has stressed that he seeks a ‘straightforward deal’ with the United States for assistance in interdicting and prosecuting criminal elements pulling strings in Jamaica from the US.

Reportedly, PM Andrew Holness has stressed, “One of the areas that we’re pursuing is a greater partnership with the United States; and today we had an excellent meeting that was hosted by the Department of Justice and had various law enforcement agencies, including the FBI and other entities, and we were able to discuss our current slate of programs that we have with them,”

As per Holness, the government is looking for more cooperation with the USA when it comes to rising crime scenes in Jamaica. But, the tone that the Jamaican leader has used this time is remarkably different.

The Jamaican leader was on a 5-day tour to the USA and was poised to meet the State Department officials to discuss enhanced security cooperation with the US. However, he didn’t reprimand Biden as he did a few days ago.

If one remembers, Andrew Holness had stressed that the only reason to visit the US is to get more intense cooperation in dealing with the foreign actors in our local crimes.

Through such remarks, Holness tried to lessen the impact of his accusations of the US by pointing out that the Jamaicans living overseas are also behind the issue. Holness was anticipated to be more robust in the USA this time. However, the prime minister has again become a cuddly chihuahua of the USA.

Back to US’ Bastion

In just five days. Jamaican leaders are back to their original colors. Yesterday, Jamaica paid tribute to countries for 60 years of diplomatic relations, including the US.

Jamaican Foreign Affairs and Foreign Trade Minister, Kamina Johnson Smith, in the senate stressed, “We pay tribute to these countries which have been with us from the very beginning. Their faith in our ability to chart our own destiny and their commitment to lending support in this regard have not gone unnoticed,”

Now, Jamaica is an ardent supporter of American interests in the Caribbean. The nation has also been a member of the Organization of American States (OAS) since 1969, which ‘collaborates’ with the other Member States to achieve the stated objectives of “Democracy.”

Read More: US’s cuddly chihuahua in Jamaica has turned into a snarling rottweiler

The real idea behind blaming the US

As he was feeling the heat from the Jamaicans due to the rising crime in the country, Andrew Holness’s entire play to blame the US was for his own personal interests. Make no mistake, there would be more cooperation between US and Jamaican officials in the future.

Holness’ meet up with US state dept. officials and the FBI could end up turning real nasty for Jamaica. FBI and ATF could interfere in the Kingston internal matters which could turn the already tumultuous nation upside down.

For the unaware, Federal Bureau of Investigation (FBI), as well as the Bureau of Alcohol, Tobacco, Firearms and Explosives (ATF), have already setted up their offices in Jamaica as part of an initiative to help tackle crime and violence, back in 2016.

Read More: US-Africa Summit: An opportunity for Africa to rule the roost

The sovereignty and security of the Jamaican state should be the sole responsibility of Andrew Holness and his government. However, the leader has decided to rely  on American officials to fix his nation.

The criminals of Jamaica are looking for a perfect excuse to spurt more tensions in the nation and the FBI and ATF would do the same thing. This is what happens when you elect a spineless leader.