Lula Da Silva’s return could be really gloomy news for a group like CELAC, which is currently quite significant for Saint Vincent and the Grenadines 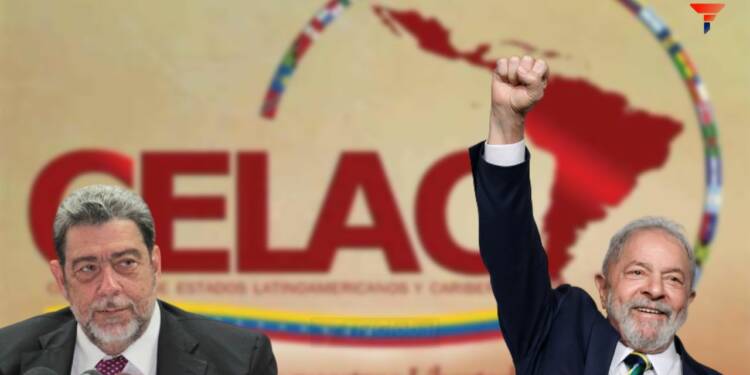 Luiz Inácio Lula da Silva, the new president of Brazil, notified his Bolivian counterpart, Luis Arce Catacora, that his nation would be re-joining the Community of Latin American and Caribbean States (CELAC), from which it withdrew in 2020 at the suggestion of former President Jair Bolsonaro.

The decision will be ratified by Lula during the VII Summit of Heads of State to be held in Buenos Aires, Argentina, on 24 January, Bolivian deputy foreign minister Freddy Mamani has announced.

In a statement by the Bolivian minister, the government of Bolivia has stressed, “his participation of the president of Brazil, Brazil’s return to Celac is very important, this announcement is fundamental for Latin America and the Caribbean and will strengthen the process of regional integration,”

Now that CELAC’s presidency is up for grabs, Brazil has rejoined the organization. Additionally, Saint Vincent and the Grenadines are doing every effort to assume the presidency of CELAC. This week, SVG’s  Prime Minister Dr. Ralph Gonsalves traveled on a visit to Brazil and Guyana

For the unaware, Gonsalves stated in December that Kingstown hopes to take over the CELAC presidency.

While traveling to Brazil and Guyana, the prime minister is also seeking support for St. Vincent and the Grenadines in its bid to become the CELAC presidency and chair.

And the goal here might be to advance CELAC’s agenda—namely, opposition to US political intervention and interference—again. CELAC aimed to provide Latin America and the Caribbean with a long-term means of avoiding American tutelage and interference from the moment it was founded in 2011.

CELAC was born 10 years ago as a mechanism to face U.S. interference. pic.twitter.com/fC8zKNk8w9

Hugo Chavez, the former president of Venezuela, emphasized at the 2010 summit in Mexico that the formation of CELAC represents the revival of the unifying spirit of 19th-century independence in Latin America. And since then, the group has often portrayed different opinions from what the US has asked or advised for.

In the 21st century, Saint Vincent and Grenadines appears to be one of the most Anti-US nations in the Caribbean as it has often extended hands of friendship for Cuba and Venezuela.

Lula could be an obstruction

However, Saint Vincent and Grenadines has a very nonsensical bee in their bonnet if it believes that Brazil under Lula will serve the objective of uniting CELAC against Biden and the USA.

First off, the leader of the Brazilian left is frequently referred to as one of the USA’s most ardent supporters. Lula frequently displayed his devotion for the USA under Obama and Biden throughout his first two terms.

It is widely expected that Lula Da Silva is going to meet US President Joe Biden in January before starting bilateral cooperation with the world nations. In addition, the same Lula Da Silva has often irked and insulted the CELAC for going harsh against the USA.

Lula had once claimed that the alliance is just to bring the much-derided Washington Consensus back to South America, while Antonio Patriota, the former minister of foreign affairs, dismissed the body as just “marketing or a new package for the same existing product.”

Read More: Elon Musk’s visit to Brazil creates a political tsunami for Lula and his supporters

Although Lula and his staff consistently emphasized the importance of forging better ties with neighbors, in practice, it became obvious that Brazil and its president have always wanted to play in a larger—indeed international—setting.

Lula Da Silva is a man of the left cabal, an establishment that is back in Brazil. And, his rejoining CELAC is the most horrid thing SVG could imagine. Is SVG sure that Brazil will come to CELAC’s rescue?

Ambalapuzha Temple Kerala: Timings, Travel Guide, and How to reach